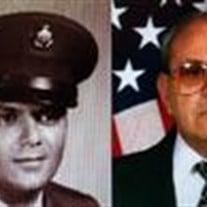 Jose Armando Gomez, a devoted family man joined our heavenly father on September 1, 2012. He was born on January 8, 1943, in Del Rio TX to Gonzalo Gomez and Laura Rubio Gomez. He is survived by his wife, Annabelle Gomez, his daughter, Rosie Mendoza and husband Frank, his son Jose Gomez Jr. and wife Elissa, and his son Robert Gomez. Grandchildren Kayla and Justin Mendoza, Joey Guzman and Jonathon, Samantha and Timothy Mendoza. His brothers, Gonzalo Gomez Jr., Ruben Gomez, Robert Gomez. Sisters Yolanda Norvell and Rosie Ranallo, as well as numerous aunts, cousins, nieces and nephews. He attended Guadalupe Catholic School and graduated from Sacred Heart Academy in 1961. He entered the Army as a Private – E1, completed basic training, Co D 1st battalion 1st brigade at Ft. Polk, Louisiana. He successfully completed the communications center specialist course at the U.S. Army Southeastern Signal School at Ft. Gordon, Georgia. He served a tour of duty in Vietnam during 1967-1968. He returned to the U.S. and finished his tour of duty at Ft. Lewis, Washington. He was honorably discharged from the Army as a SP4 Co C, 78th signal Battalion, Ft. Lewis Washington. He met the love of his life, Annabelle Zamora while on leave in Del Rio, TX. They later married on December 6, 1969 in Uvalde, TX. They were blessed with three children. He worked for HEB Grocery Store for many years, and later joined Super S Grocery store in Uvalde. He later became a civil servant at Laughlin Air force Base and proceeded in accepting an assignment at Worms Army Base in Germany, where he worked as a grocery manager. He was then transferred to Ramstein Air force Base, where he worked as a Store Director at Vogelweh Commissary. He finally returned to his hometown of Del Rio, TX and retired from Civil Service in 2001. He was preceded in death by his parents Gonzalo Gomez and Laura Rubio Gomez. Pallbearers are Issac Martinez, Richard Barrera, Orlando Polanco, Gonzalo Gomez III, Kevin Ranallo, Ruben Gomez Jr., and Robert Gabriel Gomez. Visitations will be on Tuesday, 5-9:00P.M, September 4, 2012 at G. W. Cox Memorial Funeral Home with a Rosary vigil at 7:00P.M. Funeral service will be on Wednesday, 10:00A.M, September 5, 2012 at Our Lady of Guadalupe Catholic Church followed with interment at Sunset Memorial Oaks Cemetery.

Jose Armando Gomez, a devoted family man joined our heavenly father on September 1, 2012. He was born on January 8, 1943, in Del Rio TX to Gonzalo Gomez and Laura Rubio Gomez. He is survived by his wife, Annabelle Gomez, his daughter, Rosie... View Obituary & Service Information

The family of Jose Armando Gomez created this Life Tributes page to make it easy to share your memories.

Send flowers to the Gomez family.