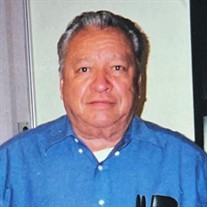 Jose Luis (Joe) Nanez was born on November 2, 1933 in Del Rio, Texas to Luis Flores Nanez and Paulita Zamora Nanez. He passed away peacefully on August 19th, 2021 in Del Rio. He is preceded in death by his wife, Noemi O. Nanez; son, Joe Louis “Pepe” Nanez III; sisters, Elida Hernandez of Del Rio, and Eloisa Martinez of Hayward, California. He is survived by his brother, Ignacio Nanez of Del Rio, his children Norma Nanez of Del Rio, Rick and Diane Nanez, of Austin, Texas, Jerry Nanez, Rodolfo Nanez, and Nora Linda Martinez of Del Rio, eleven grandchildren and thirteen great grandchildren, and twenty nieces and nephews . He graduated from San Felipe High School in 1951, as the Class Valedictorian. After graduation, he enlisted in the United States Air Force, serving his country for four years. In 1957, he met and married the love of his life, Miss Noemi Ortiz. Joe was a licensed electrician and worked in the private sector in Del Rio. He later obtained his Master Electricians license, and continued in the field until 1992, when he was employed by the local school district. He attended Southwest Texas State University, and became the Electrical Trades Instructor at Del Rio High School. It was his true calling in life. He enjoyed sharing knowledge with his students, and then upon graduation some of his students obtained full-time employment in related fields. He very much valued the relationships shared with his students, and to this day, he still has former students come up to him, to update him on their current employment, and in some cases to introduce him to their families. Mr. Nanez considered meeting his former student’s families a great honor. Outside of work, Mr. Nanez was active in various veterans organizations, the PTAs of his children’s schools and as an Election Judge for local elections. He also proudly served as a School Board Member for the San Felipe Independent School District, and volunteered his time to assist with fundraisers for good causes. Mr. Nanez retired in March of 2018, and spent time with his family, did some traveling, and pursued other hobbies. His journey here on Earth is complete, and his remaining family members will continue his legacy of service as we move forward. Peace and Happiness, Love and Respect to the Best Dad ever from your children, grandchildren and great grandchildren. Visitation will be held on Tuesday, August 24, 2021 at G. W. Cox Memorial Funeral Home from 5:00 - 9:00 pm. Mass of Christian Burial will be held on Wednesday, August 25, 2021 at Our Lady of Guadalupe Catholic Church at 10:00 am. Interment will follow to Sunset Cemetery. Funeral arrangements are under care and direction of G.W. Cox Memorial Funeral Home, 114 Fletcher Drive, Del Rio, Texas. For more information you may contact us at (830)775-2000 or www.gwcoxmemorialfuneralhome.com

The family of Jose Luis Nanez created this Life Tributes page to make it easy to share your memories.

Send flowers to the Nanez family.