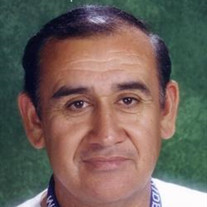 Juan Manuel Villanueva, 67, passed away May 6, 2016. He was born December 4, 1948 in Del Rio, Texas. He is survived by his spouse: Jesusita Lydia R. Villanueva; daughters: Sobeida and Yesenia Villanueva both of Del Rio, Texas; sisters: Mercy... View Obituary & Service Information

The family of Juan Manuel Villanueva created this Life Tributes page to make it easy to share your memories.

Send flowers to the Villanueva family.