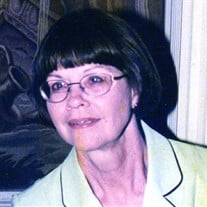 Prayers for a peaceful exit from this world and into God’s arms were granted for Karen Lynne McFadin on Saturday, May 25th, 2019. Karen was in the loving hands and hearts of her two children, Beth McFadin Walker and Seth McFadin, oldest grandson Caleb Walker, and Godmother to her children, Joanna Rose when she passed. The family has been blessed the past months by prayers of peace and love expressed by family and friends. Karen was born in Detroit Michigan in 1943 and grew up in Detroit, MI and Dallas, TX. After spending one year at Michigan State University, Karen transferred and graduated from Sul Ross State University where she met and married Ronnie McFadin in 1965. After coming to Del Rio Karen began long and rewording career as a teacher at the San Felipe Del Rio Consolidated Independent School District. Many of her students competed in the UIL contests and were regular winners of the regional contests and were competitive at the state level. Karen had a gift for teaching and will be missed by many of her students. Karen was an active supporter of the Val Verde Co 4-H, a member of the First United Methodist Church, The Cactus Thorn Garden Club, and a volunteer for the National Park Service. In addition, she enjoyed teaching line dancing to members of the community. Karen is survived by her two children, three grandchildren, Caleb, Seth and Samuel Walker, sisters and their husbands Kathy and Larry Powers and Debbie and Ed Dohring, brothers and their wives Lloyd and Peggy Wolf, and Byron and Christine Hanson, brother and sister-in-law John and Mary McFadin and sister-in-law, Patsey McFadin as well as numerous nieces and nephews. Visitation is scheduled for Wednesday, 5:00 to 7:00 p.m. at G.W. Cox Funeral Chapel. A memorial service is scheduled for Thursday, May 30th, at 4:00 p.m. at the First United Methodist Church with burial following at Westlawn Cemetery. Pallbearers will be Micheal Gruenwald, David Edwards, John Wardlaw, George Cox, Rusty Rose, and Anthony Kusenberger. Honorary pallbearers will be Danny Roberson, Tuffy Whitehead, Hadly Wardlaw, George Pride, Jerry Simpton, Henry Mills, Bill Poindexter, Harry Vogt, Bill Zuberbueler, and Bill Cauthorn. The Family would like to express their sincere thanks to Luz Perez and Tina Flores who took care of mom during her last months as well as Edna Rivera and the rest of the nurses from the Val Verde Regional Medical Center Hospice. Family will receive friends at the McFadin residence after services. In lieu of flowers, the family suggests memorials be sent to the Val Verde Regional Medical Center Hospice Co the First United Methodist Church, 100 Spring St, Del Rio Texas 78840 or the Val Verde County Extension Service, 300 E. 17th St., Del Rio, TX 78840, or charity of their choice. Funeral arrangements are under the care and direction of G.W. Cox Memorial Funeral Home, 114 Fletcher Drive, Del Rio, Texas. For more information you may contact us at (830) 775-2000 or www.gwcoxmemorialfuneralhome.com.

Prayers for a peaceful exit from this world and into God&#8217;s arms were granted for Karen Lynne McFadin on Saturday, May 25th, 2019. Karen was in the loving hands and hearts of her two children, Beth McFadin Walker and Seth McFadin, oldest... View Obituary & Service Information

The family of Karen Lynne McFadin created this Life Tributes page to make it easy to share your memories.

Prayers for a peaceful exit from this world and into God’s arms...

Send flowers to the McFadin family.