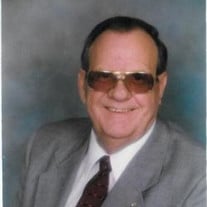 Kenneth Lee (Ken) Hildreth, age 82, passed away peace-fully, surrounded by family, at home in Del Rio, Texas on Thursday, March 16, 2017. He was born on December 17, 1934 in Royal, Antelope County, Nebraska to Ivan Percy Hildreth and Juanita Arnola (Mason) Hildreth. Ken was a 1952 graduate of Neligh High School. He served in the United States Air Force from 1952 to 1956 receiving an honorable discharge after being stationed for some time in England. On November 19, 1960 Ken married Jeanette Hershberger of Del Rio, Texas. Ken and Jeanette spent their 56 years together living in Del Rio with their children and grandchildren. He was a longtime member of the First Presbyterian Church of Del Rio, where he loved singing in the choir. Ken spent many years as a partner in the Edwards Graham Insurance Agency, where he met many of his friends in Del Rio and Val Verde County. Following his insurance career, he continued to enjoy sales and working with people through various car dealerships in town. He was also a Shriner, as well as being an avid golfer and fisherman. Ken was preceded in death by his parents, brother, Dean Oscar Hildreth, brother Ivan Percy Hildreth, Jr., sister Betty Lou (Hildreth) Krenzien, and twin sister Kathryn Lorene (Hildreth) Blair. He is survived by his wife Jeanette, daughter Tracy, son Lance, daughter-in-law Susan, and grandchildren William, Edward, & Mary Grace, along with many nieces, nephews, and other family. A memorial service is planned for 10:00 A.M. Saturday, April 22, 2017 at G.W. Cox Memorial Funeral Home in Del Rio, Texas. Ken requested that donations be made to Hospice of Val Verde Regional Medical Center, in lieu of usual remembrances or other gifts. Funeral arrangements with G. W. Cox Memorial Funeral Home, of Del Rio LTD, 114 Fletcher Drive, Del Rio, Texas. 78840 Ph: 830.775.2000

The family of Kenneth Lee Hildreth created this Life Tributes page to make it easy to share your memories.

Send flowers to the Hildreth family.