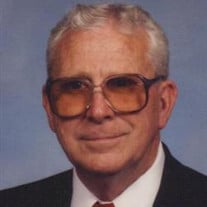 LG Taylor left us to be with his Lord and Savior Jesus Christ on November 1, 2017. LG was born on October 9, 1922 to Essie & Joe Taylor in Delta County in East Texas. Left to cherish his memories are his wife of 66 years, Edna Earnest Taylor, his daughters Elizabeth Rebecca “Becky” Taylor & Tenna Taylor Murphy and her husband Mike, and his son Thomas “Tommy” Taylor and his wife Dayna. He will also be missed by his eight awesome grandchildren, Taylor Murphy, Kenzie Murphy, Joe Taylor, Kaitlyn Murphy, Emma Taylor, Kathryn Murphy, Reagan Taylor, & Olivia Taylor. He was preceded in death by his son Joe Earnest Taylor, parents Essie & Joe Taylor, and his brother Glendale “Pete” Taylor, his mother & father in laws, Lillian & Walter Earnest. Dr. LG practiced dentistry in Del Rio for 50 years. He was given the name LG, which did not stand for anything, but the letters came from his grandfathers Luther & Gady. When he would introduce himself, many times he would say, “Hi, my name is LG. Do you know how to spell that?” He grew up working in the cotton fields in east Texas. After graduating from Cooper High School he attended 1 year at East Texas State College. When World War II began, he worked in a shipyard as a welder in Beaumont, Texas. He joined the Navy where he served on a hospital ship in the dental clinic as an assistant. That is how he discovered his love for dentistry. After the war, he attended San Diego State University earning a degree in history. He then moved to Abilene, Texas and attended Abilene Christian College to pursue studies in Bible. It was in one of his bible courses that he met the only female in the class, Edna Earnest. They married on June 1, 1951 in her mother’s living room. L.G. & Edna lived in San Marcos, Utopia, and San Diego before moving to Houston where he attended dental school at the UT Dental Branch. After graduating dental school, L.G., Edna, and their 2 young children Becky & Joe moved to Del Rio to begin his dental practice at 313 S. Main Street. Tommy was born shortly after their move to Del Rio and Tenna was born 8 years later. L.G. loved the Lord’s church. He served as deacon and then elder at the Central Church of Christ for over 50 years. He led a very active Christian life. He enjoyed sharing his faith, teaching bible classes, and shepherding. It brought him joy to visit people in the hospital, nursing homes, or those home bound. He was known for his “brownie ministry”. Dr. L.G. liked dentistry, but he loved his patients and those he worked with at the office. He was able practice his trade till he was 88 years young. He was recognized by the American Dental Association for his 50 years of service to the profession. L.G. continued his love of learning and of people. He will be truly missed by his family and friends. Pallbearers will be Ralph Sinclair, Rodney Lyman, Mike Coplan, Joe Robinette, Joe Taylor, & Mike Murphy. Honorary Pallbearers are Joe Montez, J.R. Rubio, Joe Rubio, Sr., Budge Smith and nephews Billy Taylor, & Robert Taylor. Visitation will be on Friday, November 3, 2017 from 6-9 at G. W. Cox Memorial Funeral Home. Funeral Services will be held at Central Church of Christ (402 Cantu Rd) on Saturday, November 4, 2017 at 11:00 am. Officiating will be Mike Peel. Interment will follow at Westlawn Cemetery Funeral arrangements with G. W. Cox Memorial Funeral Home, of Del Rio LTD, 114 Fletcher Drive, Del Rio, Texas. 78840 Ph: 830.775.2000

LG Taylor left us to be with his Lord and Savior Jesus Christ on November 1, 2017. LG was born on October 9, 1922 to Essie & Joe Taylor in Delta County in East Texas. Left to cherish his memories are his wife of 66 years, Edna Earnest Taylor,... View Obituary & Service Information

The family of L. G. Taylor created this Life Tributes page to make it easy to share your memories.

LG Taylor left us to be with his Lord and Savior Jesus Christ...

Send flowers to the Taylor family.