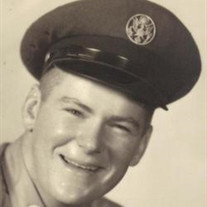 Lamoine Keith Sheehan, 83, of Del Rio, Texas, went to be with his Lord on June 18, 2016. “Monty” Sheehan was born April 21, 1933 in Milltown, Wisconsin to James Patrick and Ellen Bridget Sheehan. He is survived by his daughter: Shirley (Ray) Eubanks of Del Rio, Texas, Beverly (John) Becker of Arlington, Texas and Lisa (David) Howell of New Braunfels, Texas; grandchildren: Susan Brewster, Tracy (Don) Kirkham, Teresa Keeton, John (April) Becker, Ray (Tiffany) Eubanks, Jr., Michael (Shalonda) Becker, Kylie Howell, and Zachary Howell; 17 great-grandchildren; four great-great grandchildren; and sisters: Kay Lunsmann and Madonna Ince. He was the youngest of nine children. Monty excelled in sports, becoming the first person in his high school to receive a full scholarship to Notre Dame for sports. As a first generation American, Monty was very patriotic and felt it was his duty to serve the Nation. Rather than attend college, he enlisted into the United States Air Force during the height of the Korean War and was assigned to Laughlin Air Force Base, Del Rio, Texas. There he met his wife Wilma Faye Stidham. Choosing to stay in Del Rio with his new wife, Monty left the Air Force and worked at various jobs, one of which was the Amistad Dam project. Upon completion of the Dam, he worked for Southwest Livestock until his retirement. Shortly after his retirement, Monty and Fay’s 42 year marriage came to a close with her passing. A few years later, Monty, reacquainted with and married his childhood friend Loretta “Punky” Larson. Their 13 year marriage ended with Punky’s passing. Monty was very devout man who served his church as a Sunday school teacher, a Deacon, and as an ordained minister. His greatest joys were singing in church, playing Teaxs 42, watching the Dallas Cowboys, and sharing the company of his family and friends. Monty will be remembered as a big man with a big laugh and a big heart. He will be deeply missed by his family, friends, and all who had the pleasure of knowing him. A Chapel Memorial service will be celebrated Saturday, July 2, 2016 at 2:00P.M, at G. W. Cox Memorial Funeral Home chapel. Funeral arrangements with G. W. Cox Memorial Funeral Home, of Del Rio LTD, 114 Fletcher Drive, Del Rio, Texas. 78840 Ph: 830.775.2000

The family of Lamoine Keith Sheehan created this Life Tributes page to make it easy to share your memories.

Send flowers to the Sheehan family.