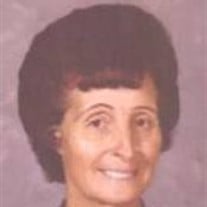 Lenora Roberta (England) Butler (88), better known as "Bert," is now at rest. Her spirited personality left us December 15, 2011, but she calmly lived on until December 2, 2012. Roberta is survived by daughter Dixie Herrington and her husband Larry [Del Rio, TX]; by grandson David Herrington and his wife Nicole, by step great granddaughter Heather Mica and by step great-great-grandchildren Alyssa and Mica and Blake Anthony [all of Fairbanks, AK]; also by granddaughter Sundi Lynn Morgan, great granddaughters Danielle, Missy, and Maggie [all of Enfield, NH], and by grandson Phillip Thurmond and wife Angela and by great grandsons Phillip Wade and Tyler [all of Baton Rouge, LA]. She also leaves sisters-in-law Sylvia England [Duncan, OK] and Ramona England [Hutchinson, KS] and son-in-law Charles Dunaway [Baton Rouge, LA], as well as many cousins and nieces and nephews. While many of her friends have passed on before her, many more of all ages are left to mourn her. Roberta was predeceased by her husband of 53 years Phillip Cleo Butler [Andrews, TX] and by her daughter Phyllis Baker Thurmond Dunaway [Baton Rouge, LA]; by her parents Robert O. and Lillie England [Shawnee, OK]; by three brothers: Otis [Hutchison, KS], Donald [Shawnee, OK], and Howard [Duncan, OK]; by a sister Fannie Heck [Shawnee, OK]; and by a step great-grandson Jimmy Mica [Fairbanks, AK]. Roberta can best be described as energetic, spirited, independent, and loyal. She threw her whole self into everything she did. Picture her as a high school basketball star racking up the points, then as a WWII bride supporting the war effort, and then as a creative and tireless homemaker with amazing baking and sewing skills. Her photo album would also show her as an efficient bookkeeper/office manager of a trucking business; as a Sunday School/Vacation Bible School teacher; as the much loved "pie lady" of an elementary school cafeteria; as a tough competitor on several bowling teams; and as the lady who pulled in the biggest catfish and the most tilapia down at Devil's Shores on Lake Amistad. But Roberta's spirit and energy are best seen in her personal relationships—she was funny and supportive and fiercely loyal and was deemed best friend, favorite relative, and best neighbor by many. Predictably she was the ultimate wife and mother—always supporting without expecting thanks or credit. And her loyalties to family and friends ran deep and long; she loved returning to Oklahoma to attend her high school reunions and to visit and pay respect to departed loved ones. Although living alone for 14 years after husband Phil's death in 1995 and always doing her own housework and even the yard work for many of those years, she always found time to show her love and caring-especially through the food prepared and delivered to so many. But most of all we will miss her feistiness and that very unique sense of humor—the surprising facial expressions and wry comments and little jokes she would play. She was absolutely one-of-a-kind and it was so very much a blessing to have known and loved her. Friends in Del Rio may pay respects during a visitation at G. W. Cox Memorial Funeral home on Wednesday, 5-7:00P.M, December 5, 2012; those in Oklahoma may attend graveside rites at Little Cemetery, Saturday, 3:00P.M, December 8, 2012, Seminole City, Oklahoma; and those in Andrews, Texas are invited to attend a memorial gathering to be announced on Monday, December 10, 2012 in Andrews, Texas. In lieu of Usual Remembrances, friends might prefer to give a memorial donation to a worthy cause of their own choosing.

Lenora Roberta (England) Butler (88), better known as "Bert," is now at rest. Her spirited personality left us December 15, 2011, but she calmly lived on until December 2, 2012. Roberta is survived by daughter Dixie Herrington and her husband... View Obituary & Service Information

The family of Lenora Roberta Butler created this Life Tributes page to make it easy to share your memories.

Send flowers to the Butler family.