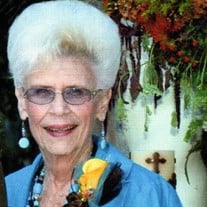 Lou Emma Brown, better known as “Snookie,” a nickname given to her by her father, was born in Del Rio, TX on January 17, 1932. She passed away peacefully to be with the Lord on Tuesday, September 10, 2019. Snookie is preceded in death by her husband, Jack, and parents, W.R. Whitehead and Dora Davis Whitehead. She is survived by her daughter Lovelyn Wharton & husband David; daughter Linn Dutton; son Wayne Brown & wife Shannon, all of Del Rio; Jackie Lee & husband David of Sonora, TX; grandchildren Misty Hanselman & husband Ray, Lindsay Dixon and the late Tyler Dixon, and Coalson & Lauren Brown, all of Del Rio; great-grandchildren: Mason & Miles Hanselman and Luke & Elijah Dixon, all of Del Rio. She is also survived by her brother W.L. “Bud” Whitehead, wife Tommy and their children: Espy, Lee, and Kelly. Snookie grew up on her family’s ranch located 70 miles north of Del Rio. She attended grade school at the one-room ranch schoolhouse, which had been established for all the local children whose parents worked or lived in the surrounding area ranches. Later, her family bought a house in town where she attended and graduated from Del Rio High School. Lou then attended Stephens College in Missouri for two years, and then she completed her degree in Education at Southern Methodist University, where she was a member of the Kappa Alpha Theta sorority. On November 21, 1953, Snookie married her high-school sweetheart, Jack Brown, in Lubbock Texas. Later they moved back to the Loma Alta area where they spent a lifetime ranching together. They were true partners in business and in life, where they especially complemented each other in the raising of their children. Lou was the matriarch of her family. Her legacy was instilling her values and beliefs in her family, and she felt it was always important to learn new things. Her greatest gift was giving. She was always making sure people were thanked for their efforts and services appropriately and went above and beyond to do so. She loved people and was a social butterfly. If there was a party to give, manage, or attend, she was there! She was a lifetime member of the First United Methodist Church where she served on the Fellowship Committee. She was also a member of the New Century Club, Study Club, Texas Sheep and Goat Raisers Women’s Auxiliary, Mignonette Garden Club, and the Clipper Club. She always helped and supported various projects in the Val Verde County 4-H Club and served on the board of the Whitehead Museum. Visitation will be held Friday, September 13, 2019, with the family receiving friends from 5:00-7:00 in the funeral home chapel. The graveside services will be Saturday, September 14, 2019 at 9 a.m. at the Masonic Cemetery for any immediate or extended family members or close friends who wish to attend. A memorial service is scheduled for Saturday at 10:30 at the First United Methodist Church with Rev Juan Osorio as the officiant. Reception to follow at the Whitehead Museum, and all are welcome. In lieu of flowers, donations may be made to: First United Methodist Church Youth Group, Val Verde County 4-H Club, the Val Verde County Library, or your favorite charity. Serving as Pall-bearers will be: David Wharton, David Lee, Wayne’Mar Brown, Coalson Brown, Ray Hanselman, and Mason Hanselman. Honorary Pallbearers will be: Henry Mills, F.H. “Tuffy” Whitehead, L.D. “Bubba” Whitehead, Dennis Funderburgh, Bill Cauthorn, Darrell Davis, David Winters, David Edwards, Raymond Quigg, Gary Leonard, W. L. “Bud” Whitehead, Hughes Schwanecke, Gerald Ross, Martin Wardlaw, Ralph Mayer, Butch Larson, Lee Bloodworth, Jay Taylor, Art Looney, & Conice Boenicke. Funeral arrangements are under care and direction of G.W. Cox Memorial Funeral Home, 114 Fletcher Drive, Del Rio, Texas. For more information you may contact us at (830)775-2000 or www.gwcoxmemorialfuneralhome.com.

The family of Lou Emma Brown created this Life Tributes page to make it easy to share your memories.

Lou Emma Brown, better known as “Snookie,” a nickname given to...

Send flowers to the Brown family.