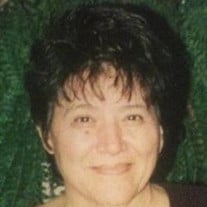 Maria Luisa Adams went to be with the Lord on April 6, 2014 at the age of 73 in Del Rio, Texas. She was born in Cotulla, TX on September 10, 1940.   She is survived by her beloved husband of 49 years, Armando M. Adams;  Children: Jesus Adams... View Obituary & Service Information

The family of Maria Luisa Adams created this Life Tributes page to make it easy to share your memories.

Send flowers to the Adams family.