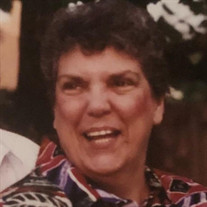 Mary Alice Schaaf Lynde passed away peacefully in the early morning hours of Saturday, October 17, 2020 after battling a chronic health condition for many years. Mary was born in Chicago, Il to George & Julia Schaaf. After graduating high school there, she joined the United States Air Force. While in the service, she met and married Roger T. Lynde. She and Roger had four children: Charles (Susie), Robert (partner Gina), Julie (Carlos), and David (Stephenie). Mary is survived by her children, as well as grandchildren and great-grandchildren plus her two sisters: Jerry (Phil) Brady and Frances Paylo, nieces, nephews, and two sisters-in-law, Iona and Janette. She was preceded in death by her husband, parents, brothers George and Robert, and daughter-in-law, Lisa. While living in Del Rio she worked at the Base Commissary, then moved to Finance to be a payroll clerk. She retired from the 47th Comptroller Flight at Laughlin AFB in 2000. She was a member of First Christian Church. Over the years she volunteered at a number of places including the Gift shop at the local hospital, Meals on Wheels, and serving on the Board of the Bethel Center. She had been a member of the Friends of the Library, The Study Club, and a group of friends they called the Lunch bunch. A private memorial service will be scheduled at a future date. In lieu of flowers, donations can be made to Mary’s favorite charities: St. Jude Children’s Hospital or the SPCA. Funeral arrangements are under care and direction of G.W. Cox Memorial Funeral Home, 114 Fletcher Drive, Del Rio, Texas. For more information you may contact us at (830)775-2000 or www.gwcoxmemorialfuneralhome.com

The family of Mary Alice Lynde created this Life Tributes page to make it easy to share your memories.

Send flowers to the Lynde family.