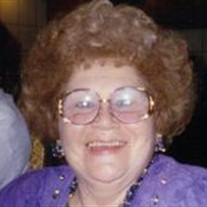 Mary G. Padilla passed away peacefully at her home on Monday, December 24, 2012. She was born on March 29, 1924 to Carlos and Isabel Cantu Gutierrez of Ocampo, Coahuila, Mexico. Mary lived her life since the age of six months in Del Rio and attended the old San Felipe School District schools. Her father passed away when she was about to start her junior year at the San Felipe High School so she needed to leave school to work and support her family. She worked with Dr. Lewis Kline as his assistant for a couple of years. She also worked at the old Del Rio Hospital on Martin Street but she was better known as Dr. Alfredo Gutierrez’s receptionist for many years. Mary is survived by four children: Albert and Cecilia Padilla, Eloy and Linda Padilla, Peter and Sylvia Padilla, and Linda Padilla Torre. Her nine grandchildren include Melinda Padilla Costilla and Lupe Costilla, Melissa Padilla Limon and Jesse Limon, Melanie Padilla Gee and Brock Gee, Edward Scott Abendroth and Linda Abendroth, Laurie Abendroth Overstreet and Mike Overstreet, Salina Padilla Licerio and Celso Licerio, Rolando Perez, Orlando Perez and Desiree A. Vasquez and Pablo Vasquez. Mary was also very proud of her twenty-five (25) great grandchildren. She is also survived by her two sisters, Olga G. Anderson of Denver, Colorado, and Elvia G. Lomas of Sebastapol, California, numerous nephews and nieces who all lovingly called her, “Auntie Mary.” Pallbearers will include Guadalupe Costilla, Mario Martinez, Jesse Limon, Brock Gee, Edward Abendroth, Jr., and Carlos Gutierrez. Honorary pallbearer will be Claudio Sotelo, Claudio Sotelo, Jr. and Genaro Rabago. The family would like to thank home care provider, Ms. Gloria Brehm, who was a very special friend and loving care giver. Also, the family cannot even begin to know how to thank the Val Verde RMC Hospice Program for the special manner in making Mary’s last days so peaceful and calm. Gratitude must also be given to Dr. Antonio Cadena and his staff for their professional medical attention and care. We cannot forget the love, warmth and spiritual guidance provided by Reverend Ricardo Rubio of the El Principe de Paz UMC for always being there when we needed him in our most anxious moments. Mary is predeceased by her husband of sixty seven years, Adalberto V. “Beto” Padilla, her parents, Carlos and Isabel Cantu Gutierrez, her brother, Andres Gutierez and her sister, Edelmira G. Sotelo. Visitations will be held at G.W. Cox Funeral Home from 5 to 9 p.m. on Wednesday, December 26, 2012. Church service will be held at 2:00 p.m. on Thursday, December 27, 2012 at the El Principe de Paz United Methodist Church located at 404 W Chapoy Street. Interment will follow at the San Felipe Cemetery.

Mary G. Padilla passed away peacefully at her home on Monday, December 24, 2012. She was born on March 29, 1924 to Carlos and Isabel Cantu Gutierrez of Ocampo, Coahuila, Mexico. Mary lived her life since the age of six months in Del Rio and... View Obituary & Service Information

The family of Mary G. Padilla created this Life Tributes page to make it easy to share your memories.

Mary G. Padilla passed away peacefully at her home on Monday,...

Send flowers to the Padilla family.