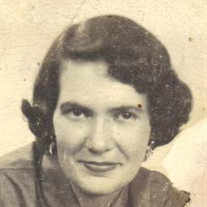 Mary Patricia Zuberbueler Skehan, 83, formally of Comstock, Texas passed away February 19, 2014 in San Angelo, Texas. She was born September 4, 1930 in Comstock, Texas to Emil and Louisa Zuberbueler. She is survived by her spouse: Francis A.... View Obituary & Service Information

The family of Mary Patricia Skehan created this Life Tributes page to make it easy to share your memories.

Send flowers to the Skehan family.