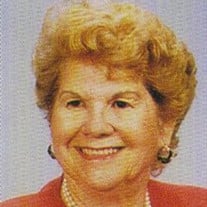 Mary Elizabeth Swinson, 92, former resident of Del Rio, went to be with the Lord, April 11, 2017 in Round Rock, Texas. She was born August 10, 1924 to E. F Measels and Mary Elizabeth Measels in San Antonio, Texas. She is survived by her daughter:... View Obituary & Service Information

The family of Mary Elizabeth Swinson created this Life Tributes page to make it easy to share your memories.

Send flowers to the Swinson family.