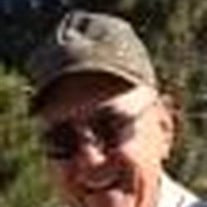 Michael “Mike” Morris, 78, of Del Rio, Texas, passed away peacefully on Sunday, March 19, 2017, after a short illness. Mike was born February 20, 1939, in San Angelo, Texas to Tony H. Morris and Amy L. Morris (nee Smith). Upon graduation from Water Valley High School, Mike joined the United States Navy where he was a hospital corpsman. While in the Navy, Mike was stationed in Albuquerque, New Mexico, where he met and married the love of his life, Linda L. Darr Morris. Mike and Linda were married in Albuquerque on October 4, 1960 and soon welcomed a son, James Beau. After an honorable discharge from the U.S. Navy, Mike and Linda returned to Texas where Mike was accepted into the Texas Fish and Game Training Academy. Mike and family were stationed in Brownwood, TX, League City, TX, and finally, Bryan/College Station, TX. Mike graduated from the Academy in 1963 as Game Warden, and was stationed Palo Pinto, County, Texas. In 1964, while living in Mineral Wells, TX, Mike and Linda welcomed their second child, Leslie Jo. In 1975, Mike accepted a promotion to Lieutenant Game Warden and relocated his family to Del Rio, Texas. After 31 years with the Texas Parks and Wildlife, Mike retired on September 30, 1993. He was commissioned a Special Game Warden and Master Peace Office after retirement and retained all the rights and privileges of the titles. Mike enjoyed two weeks of retirement, then started his second career as Wildlife Manager with Wilson Hodge Ranches. Mike had a superb work ethic, loved every job he ever had, and put his heart and soul into them. Mike was an avid outdoorsman and loved anything related to hunting and trapping. He was an official Boone & Crockett Club scorer. He was active in the Texas Trappers and Fur Hunters Association, as well as the New Mexico Trappers Association. He and Linda enjoyed going to the Fur Trappers Rendezvous held all over the United States. Mike was a voracious reader of history, and had a large collection of Texana. He loved a good gun and knife show and attended many over the years. Mike loved his little dog, Emma, who was his constant ranch companion and expert hunter. Mike is survived by his wife, Linda, of Del Rio, TX; son, Beau and fiancée Milissa Alvarado of San Antonio, TX; daughter, Leslie and partner Patti Youngs, of Ozark, MO; brother, Jeff and Sue Morris of Euless, TX; sister, June and Julius Sadowsky of Houston, TX; sister, Ann & Van Waterhouse of San Angelo, TX; and brother, Patrick Morris and partner Jan Beery of Rockdale, TX; and numerous nieces and nephews. Mike was preceded in death by his parents, and his sister Charlotte Rose Williams of Conroe, TX. A memorial service will be held at 11:00 a.m. on Friday, March 31st, 2017 at Cox Funeral Home Chapel in Del Rio, TX. In lieu of usual remembrances, donations may be sent to American Cancer Society or to Val Verde Regional Hospital Hospice program. Funeral arrangements with G. W. Cox Memorial Funeral Home, of Del Rio LTD, 114 Fletcher Drive, Del Rio, Texas. 78840 Ph: 830.775.2000

The family of Michael "Mike" Morris created this Life Tributes page to make it easy to share your memories.

Send flowers to the Morris family.