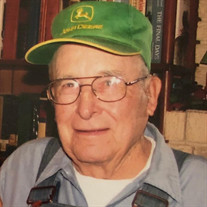 Myron Newton Bixby, loving husband, father, and grandfather died August 29, 2020 after a short battle with pneumonia. He lived and extraordinary life which spanned more than 101 years. Myron was born May 12, 1919 in Perth, KS, to Charles Albe Bixby and Kathern Salene (Crisler) Bixby. The family, seeking a livable wage after the onset of the Great Depression, moved to Riley, KS about 1930. Myron was plowing, planting, and harvesting by the age of 10 in order to help make ends meet. After playing football and baseball in high school in Wellington, KS, Myron worked various farming jobs in the Riley area before being drafted into the United States Army/Air Force in early 1942. Myron married the love of his life, Lena Marie Luthi on June 20, 1942 while on leave from his station in San Francisco. The next 20 years were spent in service to our country, during which time Myron and his growing family were stationed around the USA and the world, settling in Del Rio, Texas in 1959 with their four children - Myrna, Marsha, Steven, and Sandra. Myron, who by the time of his retirement from the USAF as a Master Sergeant in 1964 had become known locally as “Sarge”, earned the Asiatic Pacific Service Medal, the WWII Victory Medal and the Berlin Airlift Medal for Humane Action. After retirement, Myron worked as a heavy equipment operator in Del Rio. He was an expert with the bulldozer and was considered a “good blade man”. He dearly loved working with heavy equipment and did so until his final retirement at age 86 (he retired many times). Myron and Le loved spending time with their grandchildren. Each has described him as loving, kind, gentle and encouraging. He was remarkably close with his grandson Jason who visited each morning. Jason was responsible for “buttering” Grandpa’s nose on every birthday. Other fond memories include his engineer hats being formed around coffee cans, the stump of a cigar almost always hanging from his mouth, surveying at the local landfill where he worked, and his willingness to impart the wisdom gained over a lengthy and interesting life. He loved his little poodle Toby and would drive him around town to see the sights. Approaching his 100th birthday, Sarge would still drive his lawnmower to the backyard to feed the doves that anxiously gathered when they heard the mower fired up. Myron is preceded in death by his wife Lena, his parents, brother Melvin, daughter Sandy, and son-in-law Danny Wipff. Myron is survived by his children Myrna Wipff of Dallas, Marsha Lavallee (Vince) of Alpine, and Steven Bixby (Patty) of Del Rio; his grandchildren Deborah Hall (Michael), Douglas Wipff (Tria), Vince Lavallee, Kathern Burkett (Hunter), Tanna Carr, Brandon Bixby, Jason Bixby, Rachel Tarin, Brandi Estrada, Amber Reyes, Rex Garland, 14 great-grandchildren, and niece Donna Bixby Stephens. We would like to thank Shelmadine (Shelly) Phage for her years of service to both Grandma and Grandpa Bixby. Also, a big thank you to Steve and Patty Bixby for keeping things going in Del Rio when Grandpa was on his own. In keeping with his wishes, Myron’s ashes will be combined with his wife’s and spread across the Davis Mountains at a future time and date. We love you and miss you Grandpa! We wish we could all be together for another birthday but know that you are happy in heaven with Grandma. Funeral arrangements are under care and direction of G.W. Cox Memorial Funeral Home, 114 Fletcher Drive, Del Rio, Texas. For more information you may contact us at (830)775-2000 or www.gwcoxmemorialfuneralhome.com

Myron Newton Bixby, loving husband, father, and grandfather died August 29, 2020 after a short battle with pneumonia. He lived and extraordinary life which spanned more than 101 years. Myron was born May 12, 1919 in Perth, KS, to Charles Albe... View Obituary & Service Information

The family of Myron Newton Bixby created this Life Tributes page to make it easy to share your memories.

Send flowers to the Bixby family.