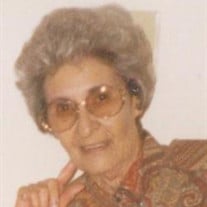 Nelda Maxine Dragoo, 86, passed away December 30, 2014 in San Angelo, Texas. She was born February 7, 1928 in Edith, Texas to Perry and Maude Long. She was retired secretary for the City of Cranfills Gap, Texas. She is survived by her daughter:... View Obituary & Service Information

The family of Nelda Maxine Dragoo created this Life Tributes page to make it easy to share your memories.

Send flowers to the Dragoo family.