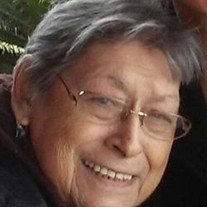 Oralia Rodriguez, 86, passed away May 11, 2015 in Uvalde, Texas. She was born September 10, 1928 in Mexico. She is survived by her daughters: Victoria (Angel) Barrera of Palos Park, IL, and Oralia Hernandez of Chicago, IL; sisters: Alicia Gutierrez... View Obituary & Service Information

The family of Oralia Rodriguez created this Life Tributes page to make it easy to share your memories.

Send flowers to the Rodriguez family.