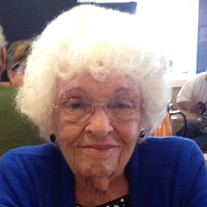 On Thursday, February 28, 2019, Patricia Anne (Sullivan) McKenzie was welcomed into the kingdom of heaven, embraced by the loving arms of Our Heavenly Father in the company of husband Larry and daughter Susan. Patricia was 85 years young when... View Obituary & Service Information

The family of Patricia Anne McKenzie created this Life Tributes page to make it easy to share your memories.

Send flowers to the McKenzie family.