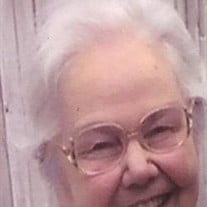 Patricia Daisy Conner Vickers, 78, passed away June 15, 2015 in San Antonio, Texas. She was born on October 29, 1936 in Pennsauken, NJ. Survivors are daughter: Susan Fite (Fred) of Del Rio, TX, son: John Vickers (Marilyn) of Waco, TX, daughter: Jessie Mulford (Berry) of Del Rio, TX, and son: Marvin Vickers (Pam) of Del Rio, TX, 8 grandchildren, and 11 great grandchildren, and sister: Molly Maerten (Bob) of Palmyra, NJ. At the age of 12 years old, she lost her mother to TB. From that time until she was 16, she lived in different homes and grew up longing to have a family and looking for God, She met a girl in high school who told her about her faith and Pat was interested to find out more about it and asked to attend a service with her. After attending a few of the services with her friend, she soon gave her heart to Jesus who loved her enough to die for her. When she was 17, she met the man who became the love of her natural life and they began a journey of love on June 11, 1954. John was interested in learning more about the faith that Pat held dear and then he, too, gave his heart to Jesus. They continued walking hand in hand united by a double bond - their deep love for God and one another until John's passing in 2012. Their journey of love and faith took them many places, including Mexico and Central America. More than once, they sold their home and they and their children moved to places to provide a home that would be a refuge of love and hope for God's servants and people. Pat is pre-deceased by her husband John, and son David. A Memorial service to celebrate her life will on Saturday, 11:00A.M, 2015 at G. W. Cox Memorial Funeral Home Chapel with Doug Murray and Talus Murphy officiating. Funeral arrangements with G. W. Cox Memorial Funeral Home, of Del Rio LTD, 114 Fletcher Drive, Del Rio, Texas. 78840 Ph: 830.775.2000

The family of Patricia Daisy Vickers created this Life Tributes page to make it easy to share your memories.

Send flowers to the Vickers family.