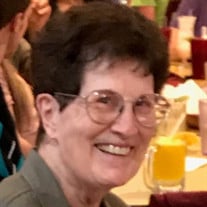 Phyllis E. Dugan, passed away suddenly on Monday, January 28, 2019, at the age of 79, at her home in Del Rio. A Celebration of Life will be held at G.W. Cox Funeral Home, at 2PM, on Saturday, February 2, 2019. Phyllis was born January, 16, 1940 in Conroe, TX to Phil E. Walker and Katie Louise Thomason Walker. She was their only child and was their miracle baby. She was born when Katie was only 6.5 months pregnant and weighed 2.5 pounds at birth. As a result, she had to wear glasses or contacts all her life and had issues with her teeth because she was born without enamel on them. Phyllis was Phil and Katie’s pride and joy and being an only child didn’t bother her at all. She grew up in Conroe, Houston, Huntsville and Willis, TX always with her many cousins and she never met a person she didn’t befriend. Phyllis loved the outdoors and water. She was on the swim team at Bellaire High School and swam for the local Shamrock Hotel swim team in Houston as well. She started her teaching career in the pool, teaching swimming lessons; in later years she even learned to Scuba Dive with her family. Phyllis was a high school member of the Bellaire Belles Flag Corp and loved to dance. Many Saturday nights she spent in High School and College with her friends, cousins and dates dancing at the Moon. Phyllis was a great shot and she could outshoot many of her male cousins and friends, but she hated to hunt. She was a great animal lover, beginning by raising pigs and horses at her grandparents farm in Willis and over the years, saved and raised many rescue dogs and cats as well. After graduating from Bellaire High School in Houston in 1957, Phyllis attended Texas Tech, University of Houston, Sam Houston State, and the University of Texas. She often joked that she had attended most of the Texas schools in the Southwest Football Conference. She graduated from UT Austin in 1961 with a Bachelor’s Degree in Education after meeting and marrying her first husband, Wiliam S. Nixon and just before having their oldest daughter, Tara Cayton in June 1961. Phyllis and Bill moved to Del Rio in 1962 where he managed Buena Vista Development Co. and still lives today. Their second daughter, Carlyn Denelle, was born in February, 1964. When Carlyn started school, Phyllis started teaching, first at St. James Episcopal school, then at North Heights Elementary, English and Reading at Del Rio Junior High School and finally at Buena Vista Elementary. In all, she taught for over 32 years, retiring in 1999. Phyllis was a woman of strong faith and a very active member in the First United Methodist Church of Del Rio, teaching Sunday school and working with the Senior High Youth Group there for years. Phyllis and Bill Nixon were divorced in 1975 and she married Charles Patrick Dugan on May 17, 1976. She received her Master’s Degree in Education, and Language Learning and Development Certificate from Sul Ross State University in 1982. Together, she and Pat lived, loved and laughed in Del Rio for almost 43 years, teaching many, many children and always being the favorite teachers and the “fun” house for many of Cayton’s and Carlyn’s friends to visit. Phyllis was responsible for encouraging many students, especially her three grandchildren, to attend college. She always saw the best in every one of her students and drew out their potential. She was a firm believer in public education and that all children had talents and the ability to learn and she would do whatever it took to prove that to them, their parents and other educators. She mentored other teachers, too, always including an invitation for those not from Del Rio to spend the holidays with her family and friends. Phyllis was a Girl Scout Leader for Troop 99 for many years, first starting with Cayton as a Brownie leader and moving up all the way with that troop; leading six girls as Senior Scouts. She was a great cook, a skill and talent she got from her mother and taught her daughters. She had a laugh and a bright smile always and started and ended each day talking and telling stories to her family and friends. Phyllis was preceded in death by her mother and father, Phil and Katie Walker, and her son-in-law, Jeffrey Janner. She is survived by her beloved husband, Charles Patrick Dugan, her daughters, Tara Cayton Dugan Janner, and Carlyn Denelle Dugan Pfeuffer, her son-in-law, Michael S. Pfeuffer, her “adopted” son Bruce Wilson and his wife, Veronica. She was very proud of her grandson, Jarod Michael Janner and granddaughters, Katie Frances and Laura Michelle Pfeuffer, who are now attending the University of Texas, Dallas, and Texas A&M respectively. She is also survived by many Walker and Smith cousins across the U.S. She was our sunshine, the life of our party, and a force of nature and will be sorely missed and remembered fondly by all whose lives she touched. In lieu of flowers, her family requests donations be made to any branch of the Humane Society or ASPCA. Funeral arrangements are under the care and direction of G.W. Cox Memorial Funeral Home, 114 Fletcher Drive, Del Rio, Texas. For more information you may contact us at (830) 775-2000 or www.gwcoxmemorialfuneralhome.com.

The family of Phyllis E. Dugan created this Life Tributes page to make it easy to share your memories.

Send flowers to the Dugan family.