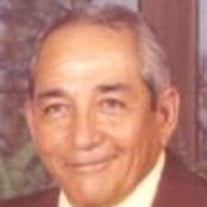 Ralph J. Mendez surrounded by his wife, children and the love of all who knew him peacefully left the world to enter his heavenly home on June 12, 2012. Born on June 26,1923 to Rafael A. and Cleotilde Z. Mendez, Ralph was preceded in death by his parents and granddaughter Stephanie L. Mendez. He is survived by the love of his life of 68 years, Mary Lou Mendez and his children: son Ralph Jr. and wife Susan Mendez, daughter Carol and husband Sergio Mireles, daughter Cheryl and husband Arturo Andrews, son Steve, Janie Mendez, his loving grand children Sergio and his wife Chissa Mireles, Samuel and his wife Renee Mireles, Cristina, Arturo Jr. and his wife Becky Andrews, Rebecca and Mario Andrews, Carmen, Steve and his wife Marie Mendez and 6 great grand children. Ralph attended and graduated from Laredo Martin High School and enlisted in the Army Air Corps in 1943 during Word War II. He then went on to college in Chicago, Illinois to study accounting. He was active in local church and community organizations. He was a member of Sacred Heart Church serving as a Eucharistic minister, Saint Vincent de Paul, City Zoning commission, Border Organization, Silver Hair Legislator and local acting group the Up stagers. A devoted Catholic, he was committed to raising his children to love and serve the Lord. An avid reader with a passion for travel, music, golf, and cooking he sought to impart those joys with his family. Ralph took great pride in his children and grand children and was ever present upon their milestones. His favorite moments were time spent on family trips and holidays sharing traditions passed on to him. He spent his last years of illness, and physical challenges head on with great faith, grace and devoted family members; as well as his caregiver Jessica de Hoyos. The memory of his smile will continue to light up the lives he touched. The family wishes to thank all those who offered support and prayers, especially Marie Cox, Delyse Alsup, Angelina Guerra, and Bonnie Bolner. To the medical community especially, Dr. Antonio Cadena, Dr. Mohamed Shafiu and staff, My Home Care and especially Val Verde Hospice. May God continue to bless you and continue to give you wisdom, kindness, and compassion, he received under your care. Pallbearers are Sergio Mireles, Sammy Mireles, Arturo Andrews, Mario Andrews, Steve Mendez Jr., and Luis Guerra. Visitations will be on Thursday, 5-9:00P.M, June 14, 2012 at G. W. Cox Memorial Funeral Home with a Rosary vigil at 7:00P.M led by Carolina Almaguer. Funeral service celebration will be on Friday, 10:00A.M, June 15, 2012 at Sacred Heart Catholic Church with Father Jim Fischler officiating. Entombment will be at a later date at Ft. Sam Houston National Cemetery in San Antonio, Texas. Funeral arrangements with G. W. Cox Memorial Funeral Home, of Del Rio LTD, 114 Fletcher Drive, Del Rio, Texas. 78840 Ph: 830.775.2000

Ralph J. Mendez surrounded by his wife, children and the love of all who knew him peacefully left the world to enter his heavenly home on June 12, 2012. Born on June 26,1923 to Rafael A. and Cleotilde Z. Mendez, Ralph was preceded in death by... View Obituary & Service Information

The family of Ralph J Mendez created this Life Tributes page to make it easy to share your memories.

Ralph J. Mendez surrounded by his wife, children and the love...

Send flowers to the Mendez family.