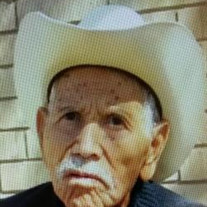 Ramon Serrano Jaramillo, 93, passed away April 5, 2016 in Del Rio, Texas. He was born May 25, 1922 in Mexico. He is survived by his daughters: Maria Guadalupe Arreola of San Antonio, Texas and Maria Magdalena Carnivele (Nicolas) of Chicago,... View Obituary & Service Information

The family of Ramon Serrano Jaramillo created this Life Tributes page to make it easy to share your memories.

Send flowers to the Jaramillo family.