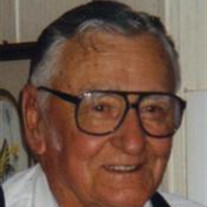 Raymond E. Carrel, 96, passed away August 26, 2012 in Del Rio, Texas. He was born May 27, 1916 in Pittsfield, Illinois to Roy and Martha McKinney Carrel. He is survived by his daughter: and son-in-law Linda and Lloyd Dumont and numerous nieces and nephews. Raymond was raised in Pike County and graduated from Pittsfield High School, Pittsfield, Illinois. He proudly served in the Air Force and was stationed in Panama and Aruba. He opened Carrel's Automotive Service in Del Rio and retired from the Texas Highway Department. Lover of animals-Raymond raised Collies, having as many as eight at a time. One puppy was selected as Reveillo V at Texas A & M. He was one of the founding members of the Amistad Kennel Club and a leader of the 4-H Dog project. Raymond headed many rabies clinics and taught obedience classes to many adults and children. After retiring from the TXDot he took art classes at the Fire House. He was a member of the Lion’s Club and Masonic Lodge and had received his 60-year pin on August 17, 2012. He is preceded in death by his wife Mary Nell Petty Carrel who he married in 1944, she passed away in 1991; also, preceding him in death are his parents; sisters: Ruth Smith, Ann Middleton, Fay Armstrong, June Chamberlain Hightman and Addibelle Smith. Special thanks to Hector, Lupe Flores and their daughters, Jovita Melendez and extended family for their untiring support. Also, special thanks to VVNC for all of the compassion and care for Dad and making us feel like family. Visitations will be on Wednesday, 5-9:00 P.M, August 29, 2012 at G. W. Cox Memorial Funeral Home Chapel. Graveside services will be on Thursday, 10:00A.M, August 30, 2012 at the Masonic Cemetery with Masonic Lodge AF & AM No. 646 officiating. In lieu of usual remembrances the family requests donations be made to 4-H Dog Project, Del Rio Lion’s Club or the Masonic Lodge.

Raymond E. Carrel, 96, passed away August 26, 2012 in Del Rio, Texas. He was born May 27, 1916 in Pittsfield, Illinois to Roy and Martha McKinney Carrel. He is survived by his daughter: and son-in-law Linda and Lloyd Dumont and numerous nieces... View Obituary & Service Information

The family of Raymond E Carrel created this Life Tributes page to make it easy to share your memories.

Send flowers to the Carrel family.