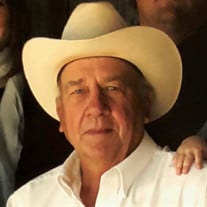 Raymond Charles Frerich, 77, husband, father, and friend to many, passed away unexpectedly on September 17, 2018, at his home, on the Frerich Ranch, in Brackettville, Texas. He was born January 17, 1941, in Del Rio, Texas, to Leo and Emma Frerich. Raymond will be lovingly remembered by his wife and best friend, Gaylene, of 53 years and their children, Mark (Amanda), Mitch (Elisa), and DeeAnn (Mike). Raymond will also be fondly remembered by his 11 grandchildren: Maddie, Kate, Kirstin, Cole, Emma, Creed, Finley, Cade, Cally, Grayson, and Anabel, by his sister Jean Householder and numerous nieces, nephews, and loved ones. Raymond is preceded in death by his parents, Leo and Emma Frerich, his children, Bonner Shane and Matt Reid and his brother, Edwin. A native of Brackettville, Raymond graduated from Brackett High School in 1959 and received a degree in Industrial Arts from Southwest Texas State University in 1964. Raymond was a third generation rancher of Kinney County. The ranch he called home, his entire life, celebrates 100 years of establishment this year. Upon graduating from college, Raymond returned to the ranch to help his father and brother run the ranching operation known as Leo Frerich and Sons. He continued to run this operation up until his death. In the community, he was known as an avid Tiger supporter and was a member of St. Mary Magdalene Knights of Columbus. He also served on the Agricultural Stabilization and Conservation Service (ASCS) board in Del Rio for many years. Raymond was the epitome of a hard-working, Southern gentleman. He loved God, his family, his land, and Texas football. His strong work ethic on the ranch never went unnoticed. He could fix anything that was broken from cars, to tractors, to the kitchen sink, and he could build anything that was needed. Raymond built the home that he and his wife raised their family in. He helped make their home a place of refuge for anyone who entered. His generosity, patience, and support made people feel loved, and his dry wit made people laugh. Raymond was a family man and was his family’s biggest supporter. He’d drive for hours, multiple times a week, in order to support his kids and grandkids in their extra-curricular pursuits. Raymond’s legacy of love, support, hard-work, generosity, kindness, and patience will never be forgotten. A Holy Rosary in Raymond’s honor will be held on Wednesday, September 19, at 7:30 p.m. at the St. Mary Magdalene's Church in Brackettville, Texas. A Mass of Christian Burial will be celebrated in memory of Raymond on Thursday, September 20th, at 10:00 a.m. at St. Mary Magdalene Church followed by a graveside service at the Catholic Cemetery. Pallbearers are Kevin Bonner, Travis Bonner, Brock Bonner, Seth Frerich, Ryan Frerich, Pat Kellner, and Nicholas Blanchette. Honorary pallbearers are Lenard Poehler, Wayne Bell, and Freddie Frerich. In lieu of flowers, memorial donations, in memory of Raymond, may be made to St. Mary Magdalene Cemetery Fund (P.O. Box 559 Brackettville, Texas 78832) or Cal Farley’s (P.O. Box 1890 Amarillo, Texas 79174). Arrangements will be handled by G. W. Cox Memorial Funeral Home, of Del Rio LTD, 114 Fletcher Drive, Del Rio, TX 78840. Phone: 830.775.2000.

Raymond Charles Frerich, 77, husband, father, and friend to many, passed away unexpectedly on September 17, 2018, at his home, on the Frerich Ranch, in Brackettville, Texas. He was born January 17, 1941, in Del Rio, Texas, to Leo and Emma Frerich.... View Obituary & Service Information

The family of Raymond C. Frerich created this Life Tributes page to make it easy to share your memories.

Raymond Charles Frerich, 77, husband, father, and friend to many,...

Send flowers to the Frerich family.