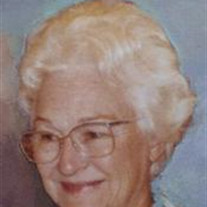 China Painter and author of "Wild About Wildflowers, Reams Evelyn Faris Lee, passed away in the early morning hours of May 30th, 2013, at the Del Rio Nursing Home. She was born June 28, 1915 to Reams and Mary Anne Avey Faris of San Marcos, TX, beloved wife of the late Victor Lee, and loving mother of Pamela Lee Humphreys Bunch of Del Rio, Geraldine Lee Calk Medcalf of Corpus Christi, TX, and one deceased son Roger Victor Lee. In the late 1930's Evelyn came to Del Rio and worked as a Governess teaching school on the Whitehead, Miers, Jarrett, and Dissler ranches. During this period she met Victor and they were married on September 15, 1942 in San Antonio, TX. She then became a home maker and loving mother. Around 1947/48, Evelyn taught elementary school here in Del Rio. Evelyn was a gracious lady, giving of her talents as a China Painter and shared those talents and knowledge with artists in her profession as she taught all over the state of Texas. She started painting on fine china in the 1950's under the direction of the late Mrs. Jewel Phillips of Uvalde, TX and would make that drive on a weekly basis. She traveled to Uvalde for 20 years, until Mrs. Phillips was no longer able to teach. At that time Evelyn, took over the instructing of Mrs. Phillips classes for many years to come. Evelyn, has held every office available with the Del Rio China Painting League, and participated with China Painting clubs in Uvalde, Pearsall, Corpus Christi, and San Antonio, TX, where she also taught, until she was unable to travel, and taught workshops held at Concan, TX, every Spring as well as her studio here in Del Rio on a weekly basis. Evelyn always looked forward to traveling to the Texas China Painters Convention in Houston, Dallas, and San Antonio with her china painting friends, setting up her booth, selling her art, and giving demonstrations. During the 1980's, Evelyn wrote, with the help of her daughter Geraldine Medcalf and had published, a booklet entitled "Wild about Wildflowers which contained the instructions on how to draw and paint our Texas Wildflowers on fine china. Evelyn painted Wildflowers, a variety of our native birds, animals, and small landscapes on bowls, plates, cups, platters, vases and even jewelry until she was unable to see due to macular degeneration. Evelyn was one of the original members of the Artist Nest at the Mall of Del Rio. She was a wonderful addition to the group for 8 years of its existence. In 2003, Evelyn and Pam Bunch opened Lee-Bunch Studio Gallery, above the family owned building, Del Rio Loan Co. Inc., on S. Main St. It was at this time that Evelyn and daughter Pam had the privilege of painting with each other on a daily basis. Her hand painted china is not only treasured by her family but a host of people throughout Texas and the US. Evelyn was preceded in death by her husband Victor Lee, one son, both parents, and four sisters. Surviving relatives include daughters: Pam Bunch of Del Rio, Geraldine Medcalf of Corpus Christi, TX; Grandchildren: Douglas Humphreys, of Del Rio, Sidney Lee Humphreys of Dallas, TX, Martin Humphreys of Del Rio, Sondra Simmons of Bryan TX., and Stella Lawson of Taft, TX; Great Grand Children Andrew Humphreys, Ryan Humphreys, Cayden Humphreys all of Del Rio, Jessica Humphreys McGahan of Austin, TX, Jessica Simmons, Patrick Simmons, Kenneth Simmons all of Bryan TX, Savannah Lawson of Taft, TX; one Great-Great Granddaughter Amy Ryn Hodges of Del Rio, TX; and numerous nieces and nephews. The Family graciously thanks caretakers Romelia Chavarria, Stephie Garcia, Lilly Avalos and Mary Lou Lopez for the excellent care they provided to Evelyn Lee. A memorial graveside service will be held by G. W. Cox Memorial Funeral Home on Saturday, June 8, at 10:00am at Westlawn Cemetery on 2nd Street, with Pastor John Cary officiating. In lieu of usual remembrances, the family of Evelyn Lee, request that donations may be made to the First United Methodist Church on Spring Street, Del Rio, TX. Funeral arrangements with G. W. Cox Memorial Funeral Home, of Del Rio LTD, 114 Fletcher Drive, Del Rio, Texas. 78840 Ph: 830.775.2000

China Painter and author of "Wild About Wildflowers, Reams Evelyn Faris Lee, passed away in the early morning hours of May 30th, 2013, at the Del Rio Nursing Home. She was born June 28, 1915 to Reams and Mary Anne Avey Faris of San Marcos, TX,... View Obituary & Service Information

The family of Reams Evelyn Lee created this Life Tributes page to make it easy to share your memories.

China Painter and author of &quot;Wild About Wildflowers, Reams Evelyn...

Send flowers to the Evelyn family.