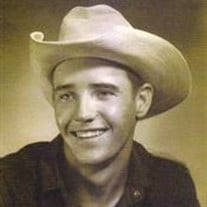 On the evening of August 14, 2013, Bobby passed away at his home on the ranch in Del Rio, Texas surrounded by family and friends. He was 82 years old. Bobby was born in Del Rio, Texas on March 3, 1931 to Douglas and Alleyne (Levering) Burk. He is one of six brothers and one sister—with a span of 18 years between the oldest and youngest. While most of his siblings left, Bobby stayed in this area. Bobby married June Billings on March 6, 1954. They have two sons, Blaine Lee (deceased) and Justin. Bobby and June are lovingly known by their grandchildren, Amanda, Blaine Lee II, Jolee and Creed as “Paw Paw” and” Maw Maw” and as Uncle Bobby and Aunt June to the rest of the family. Bobby served in the U.S. Marine Corps. At the age of 18, he earned a Purple Heart during his service in the Korean War. He began working with the U.S. Border Patrol in 1953 and retired in 1981. While in the Border Patrol, Bobby worked in El Paso, Del Rio and Comstock. After his retirement, he continued his first love, ranching. Bobby served 10 years on the Val Verde Regional Medical Center Corporate Hospital Board. Bobby will be missed by all friends and family and his great ability to recall local history. He was quoted that he remembered visiting his Uncle Howard and Aunt Dixie at their ranch house (current location: Broke Mill RV Park); “the ranch house being alive with activity, including a few rattlesnakes under the floorboards. His uncle would tell his aunt to get some water, which she would boil. His uncle would stomp on the floor and when the snakes rattled, the hot water would be poured along the crack in the floor. The hot water would kill them. The next day, the boys would drag the snakes out from under the house with sticks.”Bill Cauthorn remembers Bobby “as being renowned for driving his pickups until they were totally worn out. On one occasion, one of Bobby’s friends saw him in a new pickup truck and called me and said the “World must be coming to an End”, Bobby has a new Truck!” Bill added that Bobby was a wonderful friend and a great person. Ted Luce said, “His four greatest heroes are John Wayne, Ray Hutto, Ross Foster and Bobby Burk.”Bobby is preceded in death by his son, Blaine Lee Burk, I; brothers, Douglas Burk, Jr., Bill Burk and Tom Burk. Left to cherish his memory is his wife, June; son Justin and wife Ginger; four grandchildren, Amanda, Blaine II, Jolee and Creed; his brothers, Jack Burk, Jim Burk and sister, Jane Pratt; and many nieces, nephews, cousins and friends. A special thank you to Dr. Noe Musquiz & Janie and staff members Pat, Elvia, Bobby and Alma for their care “Above and Beyond”; Friends of Hospice “Angels”, Bonnie and Edna and family members Eddie Jean Billings and Sandi Robbins. And a thank you to a “Special Friend to the End”, Moe Barbee, DVM. In lieu of flowers, the family is requesting memorials to be sent to the Comstock ISD, Robert L Burk Scholarship Fund, P.O. Box 420577, Del Rio, TX 78842. Funeral arrangements with G. W. Cox Memorial Funeral Home, of Del Rio LTD, 114 Fletcher Drive, Del Rio, Texas. 78840 Ph: 830.775.2000

On the evening of August 14, 2013, Bobby passed away at his home on the ranch in Del Rio, Texas surrounded by family and friends. He was 82 years old. Bobby was born in Del Rio, Texas on March 3, 1931 to Douglas and Alleyne (Levering) Burk.... View Obituary & Service Information

The family of Robert L Burk created this Life Tributes page to make it easy to share your memories.

Send flowers to the Burk family.