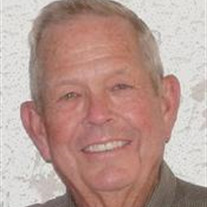 Robert “Buddy” Elledge of Uvalde passed away at his residence on April 10, 2013 at the age of 74. He was born in Del Rio to Thalis Tucker and May Belle (Carter) Elledge. He married the love of his life and his high school sweetheart, Shirley Dean Thompson, in Comstock, Texas on July 12, 1958. He is survived by his wife of 54 years; daughters Donna Elledge Ede and husband Eric, Linda Elledge, and Cheryl Elledge Sanchez and husband Damacio “Tito” all of Uvalde, Texas; son Robert Eugene Elledge, Jr. of Del Rio, Texas; brother, Thalis “Sonny” Tucker Elledge, Jr. and wife Margaret of Alice, Texas; aunt Tiny Walker of Clifton, Texas; uncle W.B. Carter and wife Gene of Del Rio; sister in law Debbie Esser and husband Carl of Uvalde, Texas; brother in law Danny Gean Thompson and wife Kathy of Roseburg, Oregon; grandchildren, Kristopher Ede of Christoval, Texas, Katie Ede of San Angelo, Texas, Kevin Ede of College Station, Texas, Kamille Sanchez, Koben Sanchez, and Kyla Sanchez, all of Uvalde, Texas; and numerous nieces and nephews. He was preceded in death by his parents. Here is a man who loved and cared for his family as much as any man could. His strict, disciplined teachings had a way to stick with people even outside his family, and as a result, he touched many lives. In addition to being a great leader and mentor, he carried his genuineness to the sports scene as he was an avid fan. He loved all sports and competition which led him to one of his greatest loves, sheep. He cared for his livestock as much as a man could and had the science of sheep showing down to an art. He had the opportunity to help his children and grandchildren, along with other youth, to extremely successful show careers. Above all, he guided himself by a strong set of values and morals and he lived a life of love, happiness, and success. Visitation was held at Rushing Estes Knowles mortuary in Uvalde, Texas on Thursday, April 11, 2013 and Friday, 1200-9:00P.M, April 12, 2013 at Cox Funeral Home in Del Rio, Texas with family receiving friends from 7-8:00P.M. Graveside services will be on Saturday, 10:00A.M, April 13, 2013 at Westlawn Cemetery in Del Rio, Texas. Pallbearers are Kris Ede, Kevin Ede, Eric Ede, Robert Elledge, Jr., Carl Esser, Tito Sanchez and Koben Sanchez, Ike Postell, and Ted Luce. Funeral arrangements with G. W. Cox Memorial Funeral Home, of Del Rio LTD, 114 Fletcher Drive, Del Rio, Texas. 78840 Ph: 830.775.2000

Robert &#8220;Buddy&#8221; Elledge of Uvalde passed away at his residence on April 10, 2013 at the age of 74. He was born in Del Rio to Thalis Tucker and May Belle (Carter) Elledge. He married the love of his life and his high school sweetheart,... View Obituary & Service Information

The family of Robert (Buddy) Elledge created this Life Tributes page to make it easy to share your memories.

Robert “Buddy” Elledge of Uvalde passed away at his residence...

Send flowers to the Elledge family.