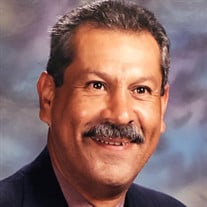 Rodolfo (Rudy) Valdez Sr. passed away peacefully at home on Thursday, April 11, 2019 at the age of 62. He was born on July 14, 1956 in Del Rio, TX and was the son of Gustavo V. Sr. and Amelia V. Valdez. He was preceded in death by his parents, Gustavo V. and Amelia V. Valdez, father and mother in law Juan and Anita Magallanes, and paternal grandparents Francisco and Francisca Valdez, maternal grandparents Manuel Sr. and Francisca T. Valadez. Rudy is survived by his wife of 28 years, Velma M. Valdez, and sons Rodolfo Valdez Jr. (wife Gabriela) of Del Rio, TX, and Oscar Valdez of Austin, TX. He is also survived by his brothers Gustavo Valdez Jr. (wife Maria) of Eagle Pass, TX, Rene Valdez (wife Velma C.) of Del Rio, TX, and numerous aunts, uncles, nephews and cousins. Rudy attended Our Lady of Guadalupe Catholic School, Del Rio public school, and graduated from Del Rio High School in 1974. He furthered his education at Sul Ross Sate University earning a Bachelor of Arts degree in Elementary Education in 1978 and a Masters degree with a Mid-Management Certification. He embarked in a life-long career as an educator with the SFDRCISD that spanned 40 years starting in 1978 and retiring in August 2018. During these years of employment, he was an elementary teacher at Lamar Elementary, Dr. Fermin Calderon Elementary, assistant principle at North Heights Elementary, Buena Vista Elementary, San Felipe Middle School, Del Rio Middle School, and Del Rio High School. In 2013, he became the Director of Students Services a position he held until his retirement in August 2018. As a young boy, along with his father and brothers, Rudy would go on fishing trips to Lake Amistad, the Pecos River, and Las Moras. Deer hunting was also one of his favorite pass time. In high school, Rudy was involved in basketball, football and tennis, in which he played doubles with his brother, Gus. Rudy carried this passion of sports into his adult life. He enjoyed spending endless hours playing golf with many friends. He was also an avid Del Rio Rams supporter and attended many of their activities and games. Countless weekends were spent cooking out and watching Dallas Cowboys football and Spurs basketball games. Family holiday gatherings were a tradition and always a time to catch up on news. As his boys grew older, winter holidays were spent skiing in New Mexico. Rudy will always be remembered as a loving husband, father, brother, and uncle. His family was the center of his life and was so proud of his wife and son's accomplishments. He always encouraged them to fulfill their dreams. Rudy will be missed for his kindness and being a friend to many. The Valdez family wishes to express their sincere gratitude to all those who supported them during this difficult time. Special thanks to VVRMC Hospice of Del Rio for their compassionate care and devotion in caring for our beloved husband and father. Pallbearers will be his nephews, Michael Valdez, Jason Valdez, Gerardo Valdez, and Daniel Valdez, brother in law Juan Magallanes, and his best friend David Estevis. Visitation will be at G. W, Cox Memorial Funeral Home on Monday, April 15, 2019 from 5:00 to 8:00 P.M. with a Holy Rosary vigil at 7:00 P.M. A mass of Christian burial will be held on Tuesday, April 16, 2019 at 10:00 A.M. at Our Lady Of Guadalupe Catholic Church. Internment will follow at Sunset Memorial Oaks Cemetery.

The family of Rodolfo V. Valdez created this Life Tributes page to make it easy to share your memories.

Send flowers to the Valdez family.