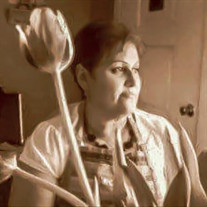 Rosalva Flores Herrera entered into rest, with family by her side, on Sunday, March 20, 2022. She was a beloved mother, grandmother, sister, and a cherished friend to all who crossed paths with her. She had an amazing sense of humor, always making everyone laugh with her silliness. Her smile was warm, comforting, beautiful, and infectious. She was kind, loving, compassionate, and selfless. Her faith was always unwavering, especially through hard times and tribulations. She often gave so much of herself and never expected nor asked for anything in return. She loved everyone; worried about them, protected them, prayed for them, and always saw the best in them. She was truly one-of-a-kind. Although our hearts are broken by this loss, we find comfort in knowing that she loved us with all of her being. To be loved by her, was to be truly blessed. Rosalva was born in Del Rio, Tx on January 1, 1950 to Rosa and Reymundo Flores who have both preceded her in death. She is also preceded in death by her husband Juan Cardenas, son Jose G. Herrera, brothers Reymundo Flores Jr. and Ruben Flores, and her sisters Maria Rabago, Eusebia Garcia, Obdulia Mayorga, and Annabelia Hernandez. She is survived by her loving children Rosa I. Herrera, Rogelio Herrera (Roseann), and Zoila Campos (David); grandchildren Yasmin S. Peña, Eduardo J. Peña, Jeremy Herrera, Joshua Herrera, James Herrera, Sean Jones, and Darius Richard; great-grandchildren Estrella Herrera, Jayce Herrera, Jesenia Herrera, Jaxon Hummel, Jeremias Herrera, Adrian Jones, and Jeune Herrera. Services are being handled by G.W. Cox Memorial Funeral Home in Del Rio, Tx. Viewing will be held on Monday March 28th at 5:00pm-9:00pm and service will take place on Tuesday March 29th at 11:00am following a second viewing time from 8:00am-11:00am. Interment to follow at Kinney County Cemetery in Brackettville, Tx. 2 Corinthians 4:16-18 "Therefore we do not lose heart. Though outwardly we are wasting away, yet inwardly we are being renewed day by day. For our light and momentary troubles are achieving for us an eternal glory that far outweighs them all. So we fix our eyes not on what is seen, but on what is unseen, since what is seen in temporary, but what is unseen is eternal."

Rosalva Flores Herrera entered into rest, with family by her side, on Sunday, March 20, 2022. She was a beloved mother, grandmother, sister, and a cherished friend to all who crossed paths with her. She had an amazing sense of humor, always... View Obituary & Service Information

The family of Rosalva Flores Herrera created this Life Tributes page to make it easy to share your memories.

Rosalva Flores Herrera entered into rest, with family by her...

Send flowers to the Herrera family.