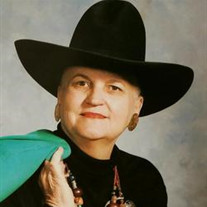 Rose Mary (Rosie) Whitehead Jones passed away on August 14, 2015 on her beloved ranch in Val Verde County. She was born on February 13, 1925 in San Angelo, TX to Willie B. Whitehead and Della Rose Halbert Whitehead. She was raised on the ranch with her brothers Bill Whitehead and W.E. Whitehead. All three received their early education in the “schoolhouse” at the ranch. Rose Mary received further education at St Mary’s Hall and Hockaday Schools. In 1942 she met the love of her life, John McKinley Jones Jr. and they spent most of their 43-year marriage in Del Rio TX. Shortly after her husband’s death in 1985, she moved back to the family ranch where she raised Boer goats until her death. Rosie was active in the community spending much of her time working on the Whitehead Museum preserving the history of Val Verde County and the early pioneer families who settled in the San Felipe/Del Rio area. Other projects include the Brown Plaza in San Felipe, San Felipe Creek renovation project, and the Sonora Ice House Museum. Rosie was a member of the Texas Sheep & Goat Raisers Association and president of the TS&GR's Auxiliary and actively involved in the Miss Wool pageant. Rosie, together with Solveig Turpin (archeologist) and her close friend, Jane Sibley of Austin TX founded the Rock Art Foundation in order to preserve the ancient paintings on the cave walls where the lower Pecos River meets the Rio Grande. The State of Texas later purchased the land and created a state historical park. She is survived by her daughter Candyce Jane Garrett, son John M Jones III and wife Cebe, granddaughters Brandie E. Garrett, Stacy Garrett Drasar and husband Mark, Ashley Jones Beauregard and husband John, McKinley Jones Williams and husband Tom; Great grand children Evelyn Rosemary Drasar, Jadyn Leigh Beauregard, Adyson Mae Beauregard, Jordyn McKinley Williams, and Marcus Q. Williams, and many cousins, nieces/nephews, extended family and dear friends. Ranching and her family heritage were her passions. Rosie always told her family that you “stand by your convictions, support your friends, love your neighbor, and do your part to leave the world a better place than you found it.” Rosie leaves a proud legacy to her community, her children, grandchildren, and great grandchildren, extended family and friends who will forever hold her memories in their hearts. The family is very grateful for all the loving care she received from her caregivers Mary Castillo and Delia Randez. Together with the wonderful care from Hospice, Delia Randez and her daughter Jamie they helped to make her final days peaceful and comfortable. Memorial service celebrating Rosie's life will be held at the Whitehead Museum, 1308 South Main St. Del Rio TX, on August 29, 2015 @ 6:00 pm. In lieu of flowers remembrances may be made to the Whitehead Museum or charity of your choice. Funeral arrangements with G. W. Cox Memorial Funeral Home, of Del Rio LTD, 114 Fletcher Drive, Del Rio, Texas. 78840 Ph: 830.775.2000

Rose Mary (Rosie) Whitehead Jones passed away on August 14, 2015 on her beloved ranch in Val Verde County. She was born on February 13, 1925 in San Angelo, TX to Willie B. Whitehead and Della Rose Halbert Whitehead. She was raised on the ranch... View Obituary & Service Information

The family of Rose Mary Whitehead Jones created this Life Tributes page to make it easy to share your memories.