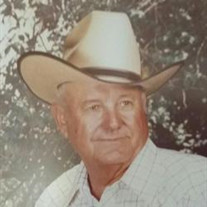 Ross Foster, 93, passed away August 5, 2014 in Del Rio, Texas. He was born October 27, 1920 in Del Rio, Texas. He is survived by his son: Billy Foster and wife Billie Lee of Langtry, TX: Daughters: Doris Nell Crane of Del Rio, TX and Susan Goble and her husband Kelly of Comstock, TX. Five grandchildren: Jimmy Crane, W.C. Foster, Justin Foster, Russell Goble, and Kelli Anne Goble. Three Great Grandchildren: Tristen, Keegan, and Edgar Crane also survive him. Ross was preceded in death by his wife Dot Foster and a Grandson, Cody Crane. Ross was the only child of William Oscar Foster and Nellie White Foster. He was a 1938 graduate of Del Rio High School, followed in his parent’s footsteps into ranching business, and has ranched in Val Verde County for over 75 years. Throughout his career, Ross has held several positions which include: Director of the Soil and Water Conservation Board, Director of the Sheep and Goat Raisers Association, Trustee for the Langtry School System, member of the Del Rio Elks Lodge #837, Member of the Del Rio Cemetery Association, and also as a member of the Langtry Lions Club. He was twice selected the Conservation Rancher of the Year for his efforts in conservation and was recognized for excellence in grazing management by the Society for Range Management in Austin, TX. Visitation will be on Thursday, August 7, 2014 from 5-9 PM at the G.W. Cox Memorial Funeral Home with family receiving friends from 5-8PM. A Celebration of his life will be held on Friday, 10:00 A.M, August 8, 2014 at the G.W. Cox Memorial Funeral Home Chapel with Brother John Cary officiating. Interment will follow at Westlawn Cemetery. Pallbearers will be W.C. Foster, Justin Foster, Ted Luce, Bo Hutto, Russell Goble, Burt Stidham, Jimmy Crane, and Kelli Anne Goble. The Family would like to express a special thanks to Abe and Lala Gutierrez for their many years of love and dedication to Ross. In lieu of usual remembrances Memorial donations may be made to: Del Rio Elks Lodge #837 P.O. Box 1131 Del Rio, TX 78841 or to Val Verde Hospice 801 Bedell Ave. Del Rio, TX 78840 Funeral arrangements with G. W. Cox Memorial Funeral Home, of Del Rio LTD, 114 Fletcher Drive, Del Rio, Texas. 78840 Ph: 830.775.2000

The family of Ross Foster created this Life Tributes page to make it easy to share your memories.

Send flowers to the Foster family.