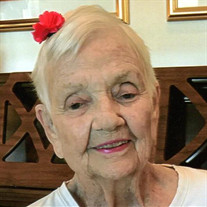 Sarah Kathryn Monroe, known affectionately as Kitty, was called home to be with our Lord on October 30, 2019 at the age of 102. Her cherished loved ones who preceded her in death include her parents, Jimmie and Katy Cass, her devoted husband, Leonard Monroe, her sisters, Margaret Williams and Joan Webb, her brother Pete Cass, and her grandson, Christopher Fest. Kitty was born in Valley Mills, Texas on June 15, 1917 to James Henry and Kathryn Louise (Tibbs) Cass, the second of four children. The family moved to Oklahoma for her early years where they suffered the loss of their home in a fire. Eventually they returned to Texas, finally settling in Marfa, where she graduated high school. Kitty played the piano, instructed by her piano-teaching, church-organist mother, and ever after music played a large role in her life. Any chance word could bring a melody to mind and she constantly sang or hummed, sharing her musical heart with all. Her quick wit, always kind, and her spontaneous jigs (or dances) also spread joy to those with her, which was always her main and most important life purpose. She attended college at Sul Ross State University where she met and married David Leonard Monroe, and they lived with his Aunt Mary Hill who served as the university’s librarian. From there, the young couple moved to several small Texas towns in the Panhandle, including White Deer, started their family, and endured WWII separations, with her husband serving in the Navy and Kitty staying with family. After the war, they continued searching for the best place to work and raise children in towns as far east as Longview and cities as large as Ft. Worth. Finally, their search landed them in Del Rio in 1962, where Leonard opened his own business, Monroe Motors, and Kitty devoted her life to her faith and community. She served in numerous organizations such as the Methodist Women’s Circle, the Del Rio Study Club, the Morning Glory Garden Club, and later the Ladies’ Golf Association, the board of Chaparral Townhomes, among others. She always put her church, First United Methodist, at the forefront, and her heart lay in service. She worked hard daily to make her church, her home, her garden, and her town the best (and shiniest) they could be. In later years, she continued with her groups but also took time to celebrate life with friends and family, loving to play golf, Bridge, Scrabble, and others, as well as work her favorite Jumbles and Crosswords. She modeled her faith, sharing Scripture, prayers, and always her cheerful, positive outlook. Kitty was a dedicated wife and mother and is survived by her son, David Leonard Monroe, Jr., and two daughters, Margaret Diane O’Steen and Dana Sue Lawson, her daughter-in-law, Delores Monroe, son-in-law Ivan Lawson, grandchildren Kelly Fest, Alisa and Jeremy Nemec, Andrea and Carlos Hyslop, Lyndee and Angus Macaskill, Larissa and Zach Ferguson, Tyler and Ramsie Lawson, and great-grandchildren Ben, Keylyn, Charlie, Iain, Allan, Owen, Hope, Jack, Anthony, Jax, Ruby, Gemma, Finnley, and Ivan. Along Kitty’s long and beautiful life path, she encountered and influenced innumerable friends and family, but she also received wonderful and caring help in her later years, starting with Marcos, Carmen, Maria, and Adriana, and continuing with her devoted caregivers at Southwest Assisted Living, who tirelessly provided for all her needs. We thank them. In lieu of flowers donations can be made to the American Cancer Society. Visitation will be at G. W. Cox Memorial Funeral Home on Thursday, October 31 from 4-6pm. Funeral services will be held at First United Methodist on Friday, November 1, at 2pm followed by interment at Sunset Memorial Oaks Cemetery. Funeral arrangements are under care and direction of G.W. Cox Memorial Funeral Home, 114 Fletcher Drive, Del Rio, Texas. For more information you may contact us at (830)775-2000 or www.gwcoxmemorialfuneralhome.com

Sarah Kathryn Monroe, known affectionately as Kitty, was called home to be with our Lord on October 30, 2019 at the age of 102. Her cherished loved ones who preceded her in death include her parents, Jimmie and Katy Cass, her devoted husband,... View Obituary & Service Information

The family of Sarah Kathryn (Kitty) Monroe created this Life Tributes page to make it easy to share your memories.

Send flowers to the Monroe family.