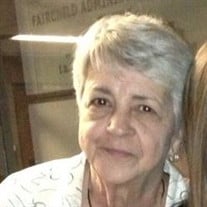 Sharon Lee McGinty Abbey Surrounded by family in a house full of love, Sharon Lee McGinty Abbey passed peacefully into Heaven on Friday, July 13.Sharon was born on November 12, 1946, in Galveston Texas to Richard “Bud” and Grace McGinty. She grew up in Houston with her brothers Richard “Butch” and Mike. All preceded her in death and welcomed her into the arms of God. When Sharon married Randy Abbey on June 25, 1965, she became a mother to Lisa and Laura. Together they welcomed children Melissa, Anna and Lee “Bubba” into the world. They all shared a wonderful life together. She lived as a shining example of a wife, mother and grandmother. Her kind heart touched the lives of so many in the Del Rio community and beyond, especially as a beloved secretary at the Del Rio Freshman School. Sharon leaves behind Randy, her husband of 53 years, along with children Lisa and Richard Mercer of Denton, Laura Nastoupil of Katy, Melissa Abbey-Duncan of Smithville, Anna and Ferrell Shinnick of Austin, Bubba and Debbie Abbey of Ozona, and grandchildren: Stephen Avery, Laney Webster, Andy Nastoupil, Jason Avery, Rachael Hall, Andrea Ray, Jessica Gloria, Jaclyn Abbey, Wyatt Duncan, Abbey Duncan, Jackson Abbey and Levon Shinnick. She also leaves 17 great-grandchildren, cousin and friend Karen Garcia, sister-in-law Sidney McGinty, as well as numerous other loved ones, both family and friends. She will be greatly missed, but her legacy of love, kindness and compassion will live on in us all. Her children arise and call her blessed; her husband also, and he praises her: “Many women do noble things, but you surpass them all.” - Proverbs 31: 28-29

The family of Sharon Lee McGinty Abbey created this Life Tributes page to make it easy to share your memories.

Surrounded by family in a house full...

Send flowers to the Abbey family.