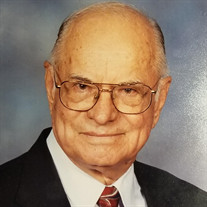 Siedel E. Moravits, 94, passed away peacefully on December 6, 2018 in Del Rio, TX. Siedel was born in Karnes City, TX. on June 20, 1924 to Willie I. and Edith Ryan Moravits. He is a navy veteran of WWII (1941 through 1946) and a navy veteran of the Korean War (1950 through 1953). He served with the U.S. Border Patrol from 1947 until his retirement in April 1979. He was a member of the Masons for 48 years and was a member of the Episcopal Church. His hobby was that of a ham radio operator and being a member of MARS (Military Auxiliary Radio System) network. His primary recreational activity was square dancing being a member of several area square dance clubs. In his retirement he spent many years reading to young children at the public library in Uvalde. Preceding in his death is his beloved wife of 42 years, Barbara Pauline Badge Moravits, his parents; Willie I. and Edith Ryan Moravits, his brother; Alger B. Moravits and his sister; Helen G. Hixon, and granddaughter; Tammy Wilson. Family members left to cherish his memory include sons; Michael E. Moravits and wife, Sharon of Bella Vista, Arkansas, Steven P. Moravits and wife Julie of Oxford, Ohio, daughter; Patricia B. Moravits Browning and husband, Leslie of Carthage, New York, grandsons;Jeffrey Moravits, William Moravits and wife Rosie, Clay Wilson, great-grandsons; George Moravits, and James Moravits, and his long time friend and companion Joyce Stone of Del Rio, TX. Visitation will be held on Monday, December 10, 2018 at 5:00 P.M. in the funeral home chapel. A Masonic Service will be held at 6:30 P.M. A church service will be held on Tuesday, December 11, 2018 starting at 10:00 A.M. at St. James Episcopal Church. Burial will follow at Jeffery Cemetery in McMahan, TX. Arrangements will be handled by G.W. Cox Memorial Funeral Home, of Del Rio LTD, 114 Fletcher Drive, TX 78840. Phone: 830.775.2000

The family of Siedel E Moravits created this Life Tributes page to make it easy to share your memories.

Send flowers to the Moravits family.