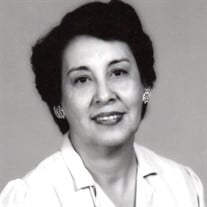 Theresa "Terry" Maldonado , 89, passed away on August 25, 2020 at Heartis Assisted Living, San Antonio, Texas, surrounded by her loving family. She was born on October 21, 1930 to Ignacio and Adela Torres in Del Rio, Texas. Terry is preceded in death by her parents and sister, Lupe Torres. Terry is also preceded in death by her husband of 63 years, Alberto "Tito" Maldonado Jr. He was the love of her life. They were married on November 9, 1952. Terry is survived by 4 daughters: Diana and husband Toby York, of Willis, Texas; Sylvia Maldonado, of Vienna, Virginia; Cecilia and husband Chris Lodek, of San Antonio; Leticia and husband, Frank Grijalva, also of San Antonio. Terry is also survived by 2 granddaughters: Kathy and husband, Tim Keanini, of Austin, Texas; and Allison Mussey, of San Antonio. Terry graduated from Sacred Heart Academy, in Del Rio, in 1950. She also graduated from Draughon's Business College in San Antonio as well as continuing her education at Southwest Texas Junior College, majoring in business management. She had a love for learning. Terry and Tito lived most of their lives in Del Rio. They both worked at Laughlin Air Force Base and retired from Civil Service with more than 60 years of service between them. They rode together to and from work daily. Terry retired as Personnel Management Specialist in the Civilian Personnel Office. Throughout her career, she received numerous awards and recognition for outstanding performance. On April 7, 1979, Terry made history as the first woman elected to serve on the San Felipe Del Rio Consolidated Independent School District Board of Trustees. She served 2 terms and was touted as a strong advocate for public school education. She had a passion for serving her community. Terry loved her family! She and her husband were a solid team with the same core values. They always put one another first and took the responsibility of parenting as their most important role. Terry was a devout Catholic. She was an active member at St. Joseph's Catholic Church and served in several ministries. She was most proud of belonging to the Sacred Heart Society and being a Eucharistic Minister. On the day of her death, Father Abel and her family were by her side before she passed away. After Terry received the last Sacrament- Anointing of the Sick, she passed away peacefully. Visitation will be held on Tuesday, September 1, 2020 at G. W. Cox Memorial Funeral Home from 6:00 - 8:00 p.m. with a Holy Rosary at 7:00 p.m. Funeral Mass will be held at St. Joseph's Catholic Church on Wednesday, September 2, 2020 at 10:00 a.m. Internment will be at Sunset Cemetery. Pallbearers will be: Freddy Maldonado, Eddie Almeda, Adam Guzman, Duane Maldonado, Chris Lodek, and Frank Grijalva; Honorary Pallbearers: Tony Gonzales, Tim Keanini, Arturo Maldonado, and Toby York. In Lieu of usual remembrances the family requests donations to the San Antonio Cancer Council, [email protected] or St. Joseph's Catholic Church, 510 Wernett St. Del Rio, Texas 78840. Funeral arrangements are under care and direction of G.W. Cox Memorial Funeral Home, 114 Fletcher Drive, Del Rio, Texas. For more information you may contact us at (830)775-2000 or www.gwcoxmemorialfuneralhome.com

Theresa "Terry" Maldonado , 89, passed away on August 25, 2020 at Heartis Assisted Living, San Antonio, Texas, surrounded by her loving family. She was born on October 21, 1930 to Ignacio and Adela Torres in Del Rio, Texas. Terry is preceded... View Obituary & Service Information

The family of Theresa Maldonado created this Life Tributes page to make it easy to share your memories.

Send flowers to the Maldonado family.