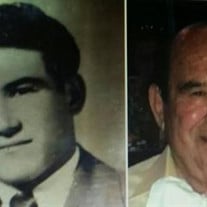 Victor Fuentes, 86, entered into rest August 11, 2015 in Del Rio, Texas. He was born May 19, 1929 in Hondo, Texas. Left to cherish his memories are his sons: Rick Fuentes and Josie E. of Eagle Pass, Texas and Victor Eliseo Fuentes and wife Yolanda... View Obituary & Service Information

The family of Victor Fuentes created this Life Tributes page to make it easy to share your memories.

Send flowers to the Fuentes family.