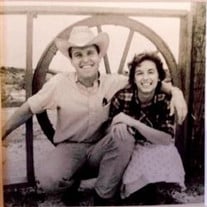 Carol was born in San Angelo, Texas on June 26, 1938 in Shannon Hospital. She was the daughter of W.E.(Bee) Friend and Mary Kincaid of Ozona. Carol grew up in Ozona- her "hometown". She graduated from Ozona High school in 1956- a member of 'the... View Obituary & Service Information

The family of Wesley Carol Whitehead created this Life Tributes page to make it easy to share your memories.

Send flowers to the Whitehead family.