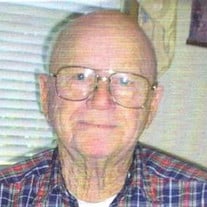 William “Pinky” Johnson, 90, passed away December 22, 2014, in Del Rio. He was born to Benjamin and Ethel Johnson on July 4, 1924, in Del Rio. A graduate of Del Rio High School in 1942, Pinky joined the Navy during World War II and served in the South Pacific until the end of the war. Upon his return to the U.S., Pinky attended the Spartan School of Aeronautics in Tulsa, Oklahoma. He then entered the Air Force to become a pilot. In April 1950, he married Shirley Johnson in Del Rio. They were stationed at Ellington Air Force Base in Houston, and his duty stations included Illinois, Korea, Japan, the Philippines, and numerous other bases all over the world. After his discharge from the Air Force, Pinky went to work for McDonnell Douglas Aircraft Co. and then retired from Bell Helicopter in 1992. Thereafter, Pinky and Shirley drove for Enterprise Rent-a-Car for 12 years. Pinky was a member of the Baptist Church and was known to be a handyman who could fix anything. His hobbies included fishing and bowling. He is survived by his wife, Shirley, and his son, William Johnson, Jr. of Burleson, Texas. A graveside memorial service will be held Friday, January 2 at 11 a.m. at Westlawn Cemetery with Rev. Marvin Wood officiating. The family would like to thank the hospice nurses for their great care. In lieu of remembrances, donations can be made to Val Verde Hospice or to charity of choice. Funeral arrangements with G.W. Cox Memorial Funeral Home of Del Rio LTD, 114 Fletcher Drive, Del Rio, Texas 78840, 830.775.2000.

The family of William Pinky Johnson created this Life Tributes page to make it easy to share your memories.

Send flowers to the Johnson family.