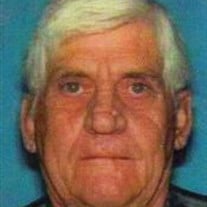 William E. (Bill) Jones, Sr., 72, went to be with our Lord on December 22, 2012 after a long courageous and brave battle with cancer. He departed at his residence surrounded by his loving families especially his long-time wife and caregiver Nina Jones. Left to cherish his memory is his wife of 49 1/2 years Nina Jones; two daughters: Cindy Jones of Del Rio and Trudi Elbert of College Station; son: Billy Jones Jr. of Ft. Worth; grandchildren: Melissa Jones of Dallas, Emily Jones of Del Rio, Tiffany Elbert of Chicago, Il, Skye Jones of College Station, Austin Elbert of College Station, Billy Jones III of Ft. Worth and Megan Jones of Ft. Worth; great-grandchildren: Tyler and Jax Lopez of Yorktown, VA; sister: Peggy Schwartz; brothers: Michael Jones, Steve Jones, Robert Jones and Kevin Jones; Aunt: Ginny Russell; sisters-in-law: Mary Lou Ramon and Sylvia Chariez; brother-in-law: Bobby Chairez. He was preceded in death by his parents: Edwin Ellis Jones and Jerri Dickerson Jones and his grandparents. Bill was born to Edwin Ellis Jones and Jerri Dickerson Jones on November 22, 1940 in St. Louis, Missouri. He lived many years in Duncan Okalahoma where he graduated from Duncan High School and immediately joined the USAF where he served proudly for six years with tours of duty, which included Guam, Tucson, Arizona and Laughlin AFB. His proudest and greatest moments were spent working with the 4080th Reconnaissance Wing and the U2 program during the Cuban missile crisis. As John F. Kennedy stated-Each played his or her role well, and each had “A bag of Tools” while stationed at Laughlin AFB he met, fell in love and married the love of his life Nina. Together they raised three children, two daughters Cindy Jones and Trudi Elbert and a son Billy Jones Jr. He was employed by the Department of Defense for over 30 years. After retiring he worked five years for Lear Sigler Corp. Bill enjoyed hunting and his many fishing excursions with Hershel Black. Besides his family the loves of his life were the Dallas Cowboys, the San Antonio Spurs and his faithful companion dog Brandi. In his younger years he was involved as a coach and manager with both Little League and Babe Ruth. He guided his Babe Ruth team to finals in Pine Bluff, AR. In accordance with his wishes there will be no formal funeral service. A private viewing for family and close friends is tentative, after which he will be cremated. In lieu of usual remembrances the family requests donations be made to Hospice of Val Verde Regional Medical Center.

William E. (Bill) Jones, Sr., 72, went to be with our Lord on December 22, 2012 after a long courageous and brave battle with cancer. He departed at his residence surrounded by his loving families especially his long-time wife and caregiver... View Obituary & Service Information

The family of William Ellis Jones created this Life Tributes page to make it easy to share your memories.

Send flowers to the Jones family.