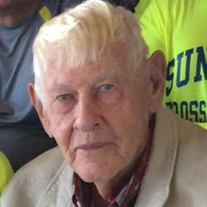 William Oliver Mills, Jr., 85, died on February 25, 2015, in San Angelo, Texas. Born in Del Rio, Texas, on February 22, 1930, and raised on the family ranch in Pandale, Texas, W.O. attended school at Pandale, Comstock, Del Rio, John Tarleton College and Sul Ross University. In 1950, he married Betty Lou Harvey and their son, W.O. III, was born in 1951. W.O. married Susan Petty Carrington in 1971 and became stepfather to Susan’s son Joe. They welcomed twin girls, Ginger and Cindy, in 1976. W.O. was a man of many trades. He served as a highway patrolman stationed in Pecos, worked as a supervisor for the Office of the State Comptroller in Austin, and established a general contracting company in Lakeway, to name a few. In the 1980s, he assumed the operation of the family ranch, where he lived out the rest of his life ranching, fishing, and enjoying the land he loved. For all that knew him, W.O. (“Buddy”), was a faithful and kind son, brother, husband, father, grandfather and friend. He counted himself lucky for the time he got to spend with the people he cared about, whether as a supportive presence at his children’s and grandchildren’s events or hanging around a campfire, storytelling with friends. An intelligent man who loved to tinker, he took pride in his abilities to assimilate to changing technologies over the years and could jury-rig a solution to any problem. A child of the Great Depression, his stories and experiences served to educate and inspire the younger generations. He was a 32nd Degree Mason, a licensed pilot, and a member of the Methodist faith. He loved life and took every opportunity to share his joy with others. We will miss this man with his big hands and his big heart. W.O. was preceded in death by his parents, William Oliver and Eleanor McReynolds Mills of Pandale, and his sister and brother-in-law, John and Mae Belle Mills Borth of Austin. W.O. is survived by his wife and best friend of 43 years, Susan of Pandale, their daughters, Ginger Mills of Austin, and Cindy Mills Mehaffey and her husband Josh of Hamilton, a son by his first marriage, William O. Mills, III, and his wife Susan of Dallas, and a stepson, Joe C. Carrington, IV, and his wife Elaine of Lorena. He is also survived by his sister, Barbara Mills Ballew and her husband Gaines of Edmond, Oklahoma, his grandchildren Amanda, William, and Amelia Mills and Madeleine, Morgan, Cortland, and Mills Mehaffey, numerous nieces, nephews, and cousins, and his beloved dog, Gracie. He loved them all. The family would like to thank Dr. Marcus Sims of Ozona and all of the nurses, doctors, and staff of the ICU at Shannon Medical Center in San Angelo for their exceptional care, support, and compassion. It was W.O.’s wish that his ashes be spread over the ranch lands he loved in a private ceremony. A catered memorial service for family and friends will be held on March 14, 2015, at 4:00 p.m., at the Broke Mill RV Park, 6069 W. US Hwy 90, Del Rio, Texas. Casual attire, please. Contributions may be made to the Richard Hinds Memorial Scholarship Fund, P. O. Box 905, Comstock, Texas 78837. Funeral arrangements with G. W. Cox Memorial Funeral Home, of Del Rio LTD, 114 Fletcher Drive, Del Rio, Texas. 78840 Ph: 830.775.2000

The family of William Oliver Mills, Jr. created this Life Tributes page to make it easy to share your memories.

Send flowers to the Mills, family.