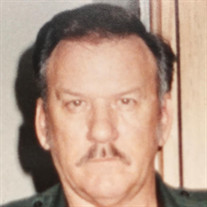 William “Bill” E. Rattay Sr., passed away on April 22, 2019 at the age of 82. Bill was born October 11th, 1936 in Masontown, Pennsylvania to Steve and Lucy Rattay. Bill left the coal mining community at an early age to pursue a career in the US Airforce. He eventually found his way to Texas and was stationed at Laughlin Air Force Base in Del Rio, Texas. During his stay at Laughlin, he met Myrna Joyce Stidham and immediately fell head over heels in love. He married the love of his life at the Baptist church in the tiny little community of Pumpville, Texas and spent the next 60 plus years together. Bill left the service as a Staff Sgt and went on to join the Department of Public Safety. After several years as a DPS Trooper, Bill decided to continue his career with the Federal Government, as a Border Patrol Agent. This career took him many places around the country and he had many adventures with those travels. He returned once again to Texas where he eventually retired to spend time with his beloved family. Bill was widely known for his rattlesnake cowboy hat, his cup of coffee in his hand and his love of the outdoors. He loved to talk and share stories of his adventures in Law Enforcement. Bill was preceded in death by his parents, Steve and Lucy Rattay and sister Helen Gibson. Bill is survived by his wife, Myrna Joyce Stidham Rattay; brothers, Steve Rattay (Sharon), and Max Rattay; sister, Carol Rattay; son, William Rattay Jr (Tamara); and daughters, Cindy Lomax (Duane) and Tammy Thomas (Blair). Bill also left behind six beloved grandchildren and five great-grandchildren. He left behind numerous friends and family who will miss him dearly, but whom have all been enriched by having been a part of his journey. A Chapel service will be held on Friday, April 26, 2019 at 10:00 A.M. in the funeral home chapel. Internment will follow to Sunset Cemetery. Funeral arrangements are under the care and direction of G.W. Cox Memorial Funeral Home, 114 Fletcher Drive, Del Rio, Texas. For more information you may contact us at (830) 775-2000 or www.gwcoxmemorialfuneralhome.com.

The family of William Rattay created this Life Tributes page to make it easy to share your memories.

Send flowers to the Rattay family.