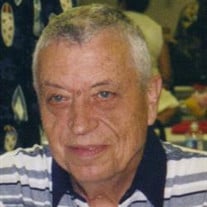 Bill was born on December 27, 1933 in Allentown, Pa. to William A. and Emma Schuler. He was preceded in death by his wife Ann Bode Schuler, his son David W. Schuler and his parents William A. and Emma Schuler, he joined them on February 25, 2014. He is survived by his daughter Cynthia (Cindy) Schuler Staveness, husband Marlin, Brenda Schuler Alanis, husband Oscar all of Del Rio, grandsons Clinton E. Robertson, San Angelo, Seth A. Schuler, Del Rio and Christopher Elrod, Lubbock. He is also survived by his brother Ronald L. Schuler and wife Faye of Center Valley, PA., sister Nancy A. Miller of Coopersburg, PA, and numerous nieces and nephews. He also leaves behind many friends. Bill was very involved in the community throughout his life. After high school he joined the U.S. Air Force and served four years as an Air Policeman. He received his honorable discharge on March 24, 1956 and he and Ann were married on May 12, 1956. He served for 3 years as a policeman with the City of Del Rio, quitting in order to obtain his C.P.A. license. He practiced accounting from 1960, obtaining his CPA license on August 1, 1967 and practiced as a CPA until he passed. He and his daughter Cindy formed a partnership and practiced together as Schuler & Schuler, CPA's. He was a life member of the AICPA. He was a retired Volunteer Fire Fighter joining the department on July 3, 1956 and served on the Board of the Winter Garden Firemen and Fire Marshal District in all offices including President. He was a member of the Del Rio Chamber of Commerce, serving in various capacities of the Chamber including President of the Board of Directors and was a Life Director. He was also a member of Del Rio Elks Lodge #837 for 26 years and served as Trustee of the Elks Lodge and bingo Chairman for many years. He was a member of the Del Rio Host Lions Club for 46 years and received one of the highest honors, the Melvin Jones Fellow award. He also served on the board of the Lions Club fulfilling various offices including President. Gentlemen with the honors of pallbearers are: Grandsons - Clint Robertson, Seth Schuler and Chris Elrod. Also, Frank Larson, Howard Fletcher and Haygood Gulley. Honorary pallbearers are: Greg Nebel, John Cole, Robert Coleman, Quinton Etzel, Randy Galloway and J.D. Manis. In lieu of usual remembrances donations may be made to: Texas Lions Camp, P.O. Box 290247, Kerrville, TX 78029 or Community Health Improvement Coalition (CHIC)/Cancer Task Force, P.O. Box 421657, Del Rio, TX 78842-1657. Visitations will be on Friday, February 28, 2014 from 5:00 to 8:00 p.m. Chapel Service is on Saturday, March 1, 2014 at 11:00 a.m., all will be held at G. W. Cox Memorial Funeral Home, followed with interment at Sacred Heart Cemetery. Funeral arrangements with G. W. Cox Memorial Funeral Home, of Del Rio LTD, 114 Fletcher Drive, Del Rio, Texas. 78840 Ph: 830.775.2000

The family of William A. Schuler, Jr. created this Life Tributes page to make it easy to share your memories.

Send flowers to the Schuler, family.